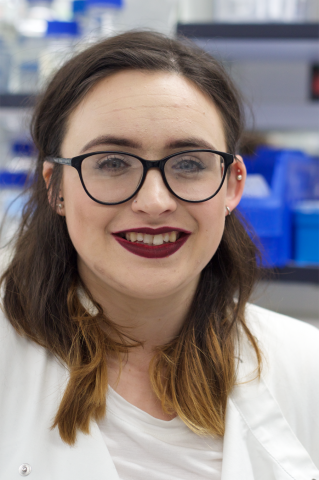 Exploring cancer from the inside out

Laura has spent the past four years exploring links between DNA repair and cancer. She is just about to finish her PhD in Professor John Rouse’s lab at the Medical Research Council Protein Phosphorylation and Ubiquitylation Unit at the University of Dundee. In September Laura will start her first postdoc job in a lab in the heart of New York City at the Memorial Sloan Kettering Cancer Center. Her fabulous pug, Gustavo, is going too.

Laura says: “The focus of my PhD has been to characterise the role of a new protein that’s been found to be mutated in patients with a rare genome instability syndrome called Fanconi anemia. It’s a cancer predisposition syndrome, which means people who have Fanconi anemia usually develop cancers such as leukaemia early on in life.

I’ve been looking at the role of the mutated protein to understand what it’s doing in the cell, how it is involved in DNA repair and so how the version of the protein you find in patients is actually messing up this role to cause disease.”

About DNA Repair: DNA holds all the genetic information our bodies need to stay healthy. As it copies instructions our DNA can be damaged by things we encounter in everyday life – UV rays in sunshine and chemicals in smoking are two well researched causes of DNA damage – but there are lots of other things that can damage our DNA too. The cell needs to be able to detect damage to DNA and repair it. Laura’s research into the proteins involved in DNA repair adds to what we understand about how cells work and what can cause disease.

Laura has just published data from her PhD in a paper in the journal Molecular Cell. Her paper explains the link between Fanconi anemia and problems with the way complex links in DNA are repaired. It is the first time the protein has been shown to be involved in the disease. Laura’s paper is one of several the collaboration are publishing at the same time, including one from the doctor in Germany who is working with patients who have Fanconi anemia.

RPA-Mediated Recruitment of the E3 Ligase RFWD3 Is Vital for Interstrand Crosslink Repair and Human Health is published in Molecular Cell.

2009: A levels in Biology, Chemistry, Maths, Spanish and Extended Project on History, Philosophy and Ethics of Science, NEW College Pontefract.

I’m interested in DNA damage and DNA repair from the angle of how it links to cancer and cancer progression. It’s always validating to know that your work might help someone but at the same time you have to recognise that basic research like mine is very very far removed from treatment. Adding to knowledge that might one day help people has always motivated me though.

I do like the practical work and experiments but what I enjoy much more about science is the problem solving. When you have a few pieces of data and you are at your desk thinking what’s going on here? How do they fit together? What should be my next step? That’s what I really enjoy. That’s what drives me.

I’m normally in the tissue culture suite before anyone else gets in. I tend to be a morning person so I come in between 7am and 8am. I set everything up and get my gels running, do a couple of hours work and then as everyone else is coming in I have a coffee break, a bit of chit chat and discuss ideas. When you are looking for a lab it’s really important to meet the other people who work there. It gets quite difficult sometimes and I think you really need a support network so you need to be able to share ideas with your colleagues. I feel so lucky here, the people are fantastic, they are so friendly, they are not just my colleagues they are my friends and honestly there are times in my PhD I don’t think I’d have got through it without having them to bounce ideas off. Sometimes you need to share ideas with someone who isn’t your boss, we all need to do that. There’s so much different expertise in the building, there’s always someone who can help.

The cells I look at are immortalized cancer cells that were originally derived from a patient sample. You have to maintain your cell cultures so that they grow in a monolayer on a dish. When you first plate the cells, you spread them out in the dish and then they grow until they touch. Ideally you shouldn’t let them all press up against each other so you have to take them and transfer them to a new dish. We also do colony forming assays and plate cells into new dishes for microscopy so I tend to spend a lot of my time in tissue culture. The later part of the day I try different drug treatments on the cells.

There have been a few moments when I’ve got a cool result. A lot of my microscopy work can be quite tedious and when you get something that makes sense, then you get a yes moment. The most satisfying was seeing all my work finally put together in the Molecular Cell paper, then I thought ‘wow’.

Growing-up I didn’t know anyone who was a scientist, it wasn’t a career option that was on my radar. I was never a child who was super into science, I never asked for a microscope for Christmas. What sticks with me as a moment where I thought ‘yes this is really interesting’ was when a former student came back to our school when I was about ten. She had an idea about trying to teach genetics to a younger audience. Basically what she had done was get Mr Potato Heads with different facial features and had put chromosomes inside them. Each chromosome had different coloured bands and she explained to us how the bands correlated to features on each Mr Potato Head. It stuck with me and that’s when I got interested in DNA and realised it is the molecule that makes us who we are. I think it’s so important to make children aware that science is an option, so I think it’s really cool that the PPU as a unit is trying to do the same with children living in Dundee.

From that point on learning more about genes and DNA influenced my choices and the things I looked into. I decided not to train to be a doctor because what I really wanted to do was understand how cancer works – what is actually going on in the cells. I never really thought ‘I want to be a scientist’, I just knew I wanted to find out more about how cancer works. As I began to move through my education I began to realise research was an option as a career and as an undergrad found out about the option to do a PhD, that it would be the logical next step. So I tested out being in a research lab to see if it was something I’d like.

If you want to achieve something you just have to try. We will all always have things we need to overcome, the important thing is that you try. Having good leadership and mentorship really helps. There was a period in the second year of my PhD when I couldn’t get a single experiment to work and I’m not someone who is used to things failing, so I found it hard to deal with, I would be beating myself up about why I couldn’t get it to work. My supervisor was brilliant at making me stop and look at what I had done so far, reminding me what I had done, that I was good at this and should stop criticising myself so much. It’s something people should be aware of coming into science, people don’t like to talk about their failures but actually most of the experiments we do don’t’ work, or don’t work the way we thought they were going to.

I’m about to publish a paper at the end of three and a half years of work and the experiments that are in there are such a small fraction of what I did. They are the result of many many attempts to get things to work. Things don’t always go the way you envisage but you have to keep pushing, keep exploring, a project can end up telling a complete different story to the one you expected so you have to be flexible. If you are rigidly obsessed with one idea you won’t get anywhere, that’s not how science works.

Talking to people was what brought me to Dundee. DNA repair is a small world. For me Dundee wasn’t somewhere on my radar, most people probably think oh I’ll go to London, but talking to people they kept mentioning Dundee. I had a look at the lab on the website, sent an email, came for a visit and fell in love with the place. It’s a fantastic place to work, it’s intense at times and it is hard work but I love it.

I was approached by Professor John Petrini when I was at a conference in Spain. My supervisor John was presenting my work at the time, Prof Petrini saw the presentation and asked John to introduce us. At the time I knew I’d like to do a post doc but hadn’t started to look for a lab yet. I went and listened to Prof Petrini’s talk, found it interesting and then the more I looked at the research happening in his lab at the Memorial Sloan Kettering Cancer Center the more I realised it was pretty perfect. I did apply to another lab in New York and to one in Canada but in the end I had a gut feeling it would be the right place for me. I had the same when I came here - you can look at the facts but when I came here to the PPU I thought, yes, this is the place and I felt the same when I visited the lab in New York.

I always wanted to work abroad and as a scientist it’s a good thing to do for part of your career, as a postdoc it’s a good time to go and it’s a great opportunity. At the moment it feels a bit surreal, I don’t think it’s sunk in yet, it probably won’t until I arrive in New York.  My new lab is in Manhattan on the Upper East Side about twenty minutes away from Central Park, so it’s a really nice location but the research collaborations are strong too. The lab is in a cancer hospital so the scientists get data from the patients who are treated there, I’ll be looking at the role of DNA repair proteins in cancer progression.  I haven’t finalised the project details yet but I’m really looking forward to getting into it.

Find out more about our PhD programme here.