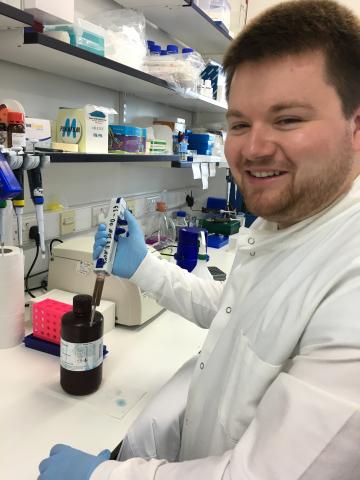 Luke is a PhD student in Dr Gopal Sapkota’s lab where he is helping to explore a family of proteins called FAM83 that little is known about yet. He spends a lot of time trying new things to see how the proteins respond and is most interested in a FAM83 protein involved in mitosis. Given the FAM83 proteins are uncharacterised he likes that almost anything he finds is novel.

Luke says: “Mitosis is central to everything, from the survival of simple eukaryotes to complex human beings. It’s a controlled and conserved process that’s essential for life to continue. In my PhD I’m trying to understand mitosis in more depth.”

About mitosis: New cells are made when existing cells divide to make exact copies of themselves, scientists call the process mitosis. If the body needs more cells to grow or to replace damaged tissue, mitosis is how they are made. The new cell has copies of the same DNA and organelles as the cell it split from.

One other research aspect the Sapkota lab works on is biotechnology. Luke was part of the research team that developed a novel protein destruction system that will be used in his project to degrade FAM83 proteins and see what happens in cells.

Targeting endogenous proteins for degradation through the affinity-directed protein missile system is published in Open Biology.

Favourite research tool: The Bradford assay, the colour change reveals protein levels in a sample. Follow @mrcppu on Twitter or Instagram to see pictures of Luke in action.

I want to know how things work, that’s the ultimate driving force for me. In Gopal’s lab half of us are working on a family of uncharacterised proteins called FAM83 exploring their function in cells. There are eight members in this family called A – H and I work on D. It’s already been published that D interacts with proteins on the spindle apparatus in mitosis so I’ve been learning some mitotic techniques to try and explore that further. The work is predominantly cell culture based just now but what I’m aiming for is to move into the test tube, to see if I can reconstitute a reaction.

In vitro is the ultimate angle to work out what the protein is doing in mitosis. The current idea is that the protein is phosphorylated so we are trying to figure out what the kinase is that facilitates it. Taking it into a test tube allows a more restricted setting and removes the background noise of other kinases. You can build your ideas in that setting and then eventually go back and test it in the whole cell.

In my first year I spent four and a half months in two different labs. The rotations approach is good as it gives you an idea if that’s the lab you want to spend the rest of your PhD in. I stayed with Gopal and I’ve been there for about 18 months now as a PhD student. Everyone in the lab is really friendly, it’s a good working environment and the project is interesting as well.

I grew up in a little village in the Scottish Borders so for me Dundee is quite a big city. I really like it here, the unit is such a multicultural environment, I think it would be useful to experience other places as well. I did my undergrad in Dundee too.

I’ve heard good things about combining a postdoc with working in another country. I could happily live here but there’s that element of going to see the world while you can. One of the things you get told as a PhD student is that if you want to be really successful in your scientific career you need to be prepared to travel about and go where the jobs are so that resonates.

In Dundee when you get into your final honours year you spend the whole of the first semester in a lab. We didn’t have any lectures at the same time so you could completely immerse yourself. I spent 11 weeks in the lab, long enough to know that I liked it. Having lab time at undergrad was one of the main reasons I wanted to do a PhD. It’s one thing to read things in a text book and to know it’s a robust model generated from lots of research but then to actually do the research and work on things that aren’t in the text book, that’s more motivating.

I studied anatomy and physiology so spent part of the time looking at the human body and the other half looking at how it works. The physiology modules went into detail on signalling pathways and that was the side of it I found most intriguing.

Anatomy is pretty much written down already, it’s not going to change much, physiology is where I think the really interesting parts are. Working on signalling pathways and getting the chance to explore them in the lab setting is what I’m really interested in.

As a PhD student here you’ve got literally everything you need at your fingertips. There’s also core facilities with expertly trained people working there to help you out. If there is something you can’t do within the unit then somewhere else in the building there will be somebody who can help you, so it’s a good place to work with other people and to learn new techniques.

I enjoy the aspect of trying to figure something out that you can’t just google. I’m one of those annoying people at parties where somebody says something and I’m like ‘are you sure about that?’.

In a lot of jobs, the hours you put into the job translate into the benefits and rewards you get out of it, but with this kind of research career a lot of the time you are just trying things and you don’t get much to show for it. Once you learn that that’s just part of it then you can get past it. When I first started I got quite frustrated when experiments didn’t work, but it happens to everybody, things don’t always work and that’s useful for training for your problem solving abilities.

There’s been one or two moments where I’ve gone to look at at result and thought oh wow. Then when you repeat it and it reproduces and you start to get more excitement, especially if you’d had a period of time where nothing has been working well, you get one great result and your motivation goes up again.

Working on something that’s quite unknown, if you find even just a tiny bit of new detail it’s rewarding. I like being the first person to see something happen. Also having a good supervisor and good lab mates helps, if things don’t work we can talk about it and then just try again.

I think a lot of the time what the public hears about science is only the big breakthroughs that are linked to disease. They hear less about the core science that looks at how things work. Understanding how things work can later translate into why it could go wrong in disease. People are missing out on all the cool things that happen in science that aren’t publicised because they aren’t disease relevant.

You can find out more about our studentship programme here.