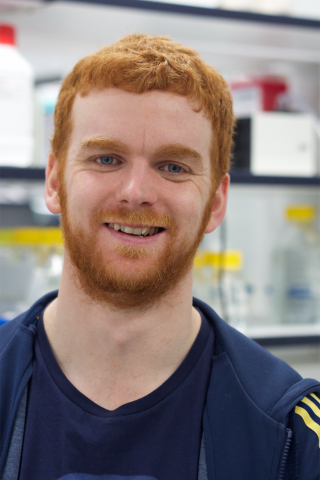 The End of Replication

Dr Tom Deegan holds a prestigious Sir Henry Wellcome Postdoctoral Fellowship. His work in Professor Karim Labib’s lab at MRC PPU is focused on the replisome, a machine that makes a copy of the DNA to pass on to new cells. There are lots of unanswered questions about what happens at the end of genome replication, Tom is searching out answers.

Tom says: “The whole point of genome replication is that you shouldn’t make any mistakes, even one nucleotide could be a problem. So what I do is to try and recapitulate the whole thing in a test tube with purified components to look at what happens right at the end, it stems from some work that contributed to my PhD.”

Tom explains the replisome: “The lab works on a multi protein machine called the replisome - the thing that’s responsible for making a new copy of your genome in every cell cycle. Every error that causes cancer in the end is propagated during this copying process, so understanding the fundamental biology of this replisome might help us to understand how, if it makes a mistake, you get mutations that lead to cancer. It’s very basic biology.”

“I published a first author paper during my PhD, it provides a molecular explanation of how one of the kinases that regulates the beginning of chromosome replication actually works,” says Tom.

I’m interested in what happens to the replisome towards the end of its life. The machine is built in situ on DNA at the start of replication. Both the process of building and disassembling the replisome are highly regulated. Karim, along with others, recently discovered that taking the replisome off DNA is just as complex as putting it on. We call this termination of replication and overall this final phase hasn’t received much research attention yet. What the problem would be if you don’t disassemble the replisome properly is still an open question. I think Karim’s lab is the right place to study it in more depth.

The lab I did my PhD in figured out how to recapitulate DNA replication in a test tube from purified DNA and purified proteins. To get to that stage was the culmination of a few decades of work in my former supervisor’s lab (Dr. John Diffley). It was a technological breakthrough and quite an amazing thing to happen in the lab where I was doing my PhD. We refer to it as the reconstituted in vitro replication system. It’s more a technique than a technology, it’s not something you could just buy as a kit, it’s much more specialist than that. Standing on the shoulders of giants is a bit of a cliché but to be able to do that is a product of, as far as I can see though I’ve only been doing it a short time, 25 or 30 years of many peoples work in many different labs to identify all these factors and understand a little bit about what each one does. You can now ask and answer questions that aren’t really possible with other approaches.

Without the background noise of the cell you can use in vitro replication to do simple, elegant experiments. Everything that goes into that tube is under your control so you have it in your hands to vary whatever you want. You can put in a protein or a probe, include a mutant version of a protein or not, see how the system responds to exaggerating the concentration of a given factor, it’s a very flexible system. I use radiolabelled 32P, an isotope of phosphorous, to label one of the building blocks of DNA, I can then tell if it’s been incorporated into the reaction.

One of the most interesting things about working here is that it’s not a ‘one approach’ lab in any way. There are people who work in C. elegans nematode worms and mouse embryonic stem cells, and others are using live video microscopy to look at the termination process in real time. Looking at the process in different systems might tell us if termination works differently at different points in evolution.

I’m motivated by the fact that I just don’t like not knowing. It’s like a funny sort of contradiction. Most of the time it feels like you are swimming around in this sea of ‘what’s actually happening here?’ but the motivation is there the whole time to find out, even though most of the time you don’t know the answers. It’s a contradiction I think most scientists probably feel at some level, the thrill of a chase that goes on forever.

Publishing a paper is an arbitrary end point, it’s just another point on the way to solving a bigger problem. I learnt this lesson when I published a first author paper during my PhD. I can’t imagine an end point - look at really senior scientists, they are still going and if you look at their first papers you can see there’s a flow of logic and interest over 25 or 35 years. Imagine what they did on day one and consider what they are doing now, that’s what’s so appealing. To have a body of work that you can look back on and think, well when I started I really didn’t know anything.

I do think it’s important to know as much as about possible what you are getting into if you’d like to do a PhD. You’ve got to be ok with the fact that for most people there’s a lot of failure and that’s ok because it’s true of the very best scientists too. A lot of people starting a PhD have just probably reached the peak of their academic achievement so far, just done their finals, maybe coming off the back of a first class degree from a good university and feeling like it’s easy. But doing a PhD is not the same thing, there’s an aspect to which doing bench work is a totally different pursuit to understanding a text book or writing a good essay or doing well in an exam.  Take summer placements and make sure you spend time in a lab so you know what it’s like to work at the bench.

When I was a PhD student one of the post docs told me to make sure I gave my supervisor a hard time, as in, ask questions and speak up. As a post doc you are supposed to be more independent, to design experiments and long term strategies of your own. As a student it’s meant to be a joint enterprise with your supervisor and for many students, through awkwardness or just not being confident enough, you can see things just drift. When I was given this piece of advice I took it to heart so now I pass it on. If you don’t understand something, there’s a problem or you aren’t sure why you are going in a certain direction it’s fine to ask, you aren’t being awkward or difficult if you ask, it’s what doing a PhD is about and your supervisor has a responsibility to deal with that and you get more out of it if you do. I certainly got a lot out of that piece of advice. You just have to remember that you do have some control over the situation if things aren’t going well, it’s not a terminal problem, even if your project totally dies most good labs will have something else you could do that would be equally interesting.

The prospect of being able to have the freedom to build a career around my research interests appeals. To be able to work with bright, motivated people to address questions and challenges is what brings me to work every day. When things are going well in the lab it’s a really stimulating environment to be in. Even if you aren’t even contributing to a successful project just the discussions that go on in the lab around it are inspiring. I find all the sharing of ideas really stimulating and I think it must be even more rewarding if your own work is part of it.

One thing people talk about a lot as a downside is that science feels like a relatively unstable career and when you have a family to think about that’s not the best thing. But then I think with this ‘downside’ argument we slightly kid ourselves. How many jobs are there really where you can say in five-years-time I’m definitely going to be here? I don’t think we are unique in science or in academia in that aspect.  I’ve been fortunate to work in excellent research environments and when you get to a certain point in your career you specialise and then there are only a few places you might be able to work, so that means you are probably less flexible geographically, in the UK there might only be three or four places that you want to go. In spite of all that people still do it. You just have to get over it. None of my friends from university are scientists and they have to think about all the same things, there’s always a compromise. I really like living here, just look outside, how could you not? It’s a really nice place to have a family, we live two miles from the beach and go up to the highlands when we can too.

I don’t imagine there are other jobs where you can be so intellectually indulgent. To just be able to have a problem and your job is to find a solution. It’s as simple and as complicated as that but it’s the best aspect of being a scientist.

You can find out more about our studentship programme here.