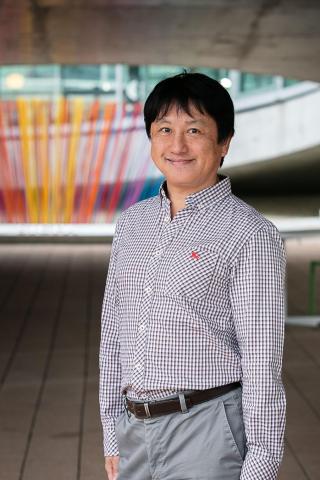 An exercise in molecular mimicry

“I’d like to translate my research into food you can buy in the supermarket”, says Professor Kei Sakamoto. “I’m trying to figure out how to create food that has a similar effect on muscle as exercise.”

Not as a replacement, he cautions, but as an aid for people whose ability to exercise is restricted by old age, disability, cardiovascular disease or other health problems. “If we can at least partially mimic the molecular effect of exercise on muscle in a food product then it could be used to augment the benefits of exercise,” he says.

Kei Sakamoto is Head of Diabetes and Circadian Rhythms at the Nestlè Institute of Health Sciences in Lausanne, Switzerland. There his team studies the signaling pathways that control energy and glucose metabolism in response to hormones, nutrients and exercise in various metabolic tissues, including skeletal muscle and liver.

He combines his role at Nestlè with an academic position at the École Polytechnique Fédérale de Lausanne where he continues to teach and supervise graduate students.

In 2012, he moved from the Medical Research Council Protein Phosphorylation Unit (MRC PPU) at the University of Dundee, where he was a Programme Leader. Five PPU members went with him to build a new lab funded by Nestlè.

“The move from academia to industry was a major step,” he says, “I thought I’d never find a better place for research than PPU and that I’d live in Dundee forever.”

Professor Sakamoto was in Lausanne to give a seminar when he was invited to join a committee of scientists to start a new industrial research institute funded by Nestlé. “Surrounded by such super star researchers, generous funding and state of art facilities in PPU I was spoilt,” he says, “the opportunity to build an excellent fundamental research lab, like Professor Sir Philip Cohen and Professor Dario Alessi have done in Dundee, with my own footprint on it was challenging, but exciting.”

The molecular effect of exercise and the exact way it can create benefits for people who are obese or have type 2 diabetes has been a lifelong fascination for Professor Sakamoto. Before he became a scientist, he hosted an aerobic fitness programme on Japanese TV. In 1998/99 he was a finalist in Japan’s National Aerobic Dance Competition. “I was a TV presenter and aerobic competitor but I wanted to figure out exactly how exercise benefits people so I did a PhD,” he explains.

“When I was an aerobic teacher, all my students and clients asked how can I reduce fat? There were several fitness guidelines that said things like exercise at 60 to 80% of your maximum heart rate for over twenty minutes, four to five times a week. But little was known about what was happening at a molecular level. About what the actual signal is that muscle contraction gives to your cell to change the metabolism and function of your body,” he says.

His research has consistently been driven by the same question - how do exercise and hormones tell muscles and liver to regulate energy balance and sugar metabolism?

Glucose is the key fuel most body cells use to generate energy. The hormone insulin, tightly controls blood glucose levels. When blood glucose rises after a meal, the pancreas releases insulin as a signal to lower glucose levels. In this way insulin regulates a network of enzymes that control glucose uptake or storage in muscle and liver cells.

“What I really want to find out is how exercise signals to muscles to control carbohydrate metabolism at a molecular level. What are the enzymes and proteins that mediate the signaling component of exercise to create responses like glucose uptake and glycogen storage? That was how I became a scientist and I’m still working on it,” says Professor Sakamoto.

In 1993, Professor Sakamoto began to answer his question. Undergraduate studies in English had led him to work at the Dai-ichi Life Insurance Company but he saw a clear route in science so took a Masters Degree in Exercise Physiology at University of Tsukuba, Japan. That led to PhD research in cell signaling at Yokohama City University and later to the Joslin Diabetes Centre at Harvard Medical School, Boston, where he completed his PhD.

He arrived in Dundee in 2003 to take up a post doc at PPU. He became a Group Leader two years later and eventually a Programme Leader and Head of Molecular Physiology in 2007. At the MRC unit he initially studied a protein called LKB1, a tumour suppressor known to help stop cancer forming in muscle. What he found was startling.

Professor Sakamoto found evidence that LKB1 is essential to make an enzyme called AMPK work in muscles during exercise. He describes AMPK as a metabolic master switch because it controls energy use by the body.

AMPK helps muscles turn glucose and fat into energy by sensing energy levels in the cell. Professor Sakamoto showed that the LKB1-AMPK pathway plays an important role in moving glucose from blood into muscle so that it can be used as an energy source during exercise.

“The laboratory in Boston where I worked during my PhD had shown that AMPK is a key enzyme for exercise-mediated glucose uptake in muscle, but how and what exactly activates AMPK was unknown for many years. It was striking to find that a relationship between a cancer suppressor (LKB1) and a metabolic regulator (AMPK) is in muscle is crucial to sugar metabolism,” he says.

At the Nestlé Institute of Health Sciences, Professor Sakamoto leads a research programme focused on AMPK. His team study the signaling network that controls energy balance in organs like skeletal muscle and the liver. Messages carried by hormones control how nutrients are properly used and stored. Disruption in this network can lead to obesity and type 2 diabetes.

“Another of my motivations is to figure out how exercise provides health benefits in association with diabetes, especially through the AMPK-mediated signaling network” he says.

The hormone insulin tells the body how to distribute glucose after a meal. When a person has diabetes, their muscles don’t respond properly to insulin and reject the message to absorb more glucose. "Exercise can still help muscle absorb glucose though AMPK so this raises the question, can we activate AMPK by small molecules or other interventions apart from exercise?” says Professor Sakamoto, “In the majority of people who have type 2 diabetes, the impaired insulin signaling network means commands to uptake or store glucose are no longer efficient. This means blood glucose stays high. It is amazing that even under such conditions, moderately intense exercise can naturally and significantly drop blood glucose levels. The effect is sustained for several hours after exercise.”

“Imagine, for a person who finds it difficult to exercise because they have medical conditions, are really overweight or have mobility problems, if we could provide a molecular way to boost the effects they get from the exercise that they can do then it would improve their health overall,” he concludes.

In the past few years Professor Sakamoto has figured out how some synthetic and natural activators of AMPK work, but it is a complex enzyme. AMPK is made up of three different proteins that come together in 12 possible combinations. These different forms are unique to different parts of the body. “We will continue our research to find an effective way to activate AMPK. What we are trying to achieve is a natural way to generate modest metabolic benefits,” says Professor Sakamoto.

The next chapter of Professor Sakamoto’s research is the hunt for any natural substance that can mimic molecular signals to augment the effects of exercise on muscle: “Because you eat food every day we want to create a product that is as natural as possible. We aren’t looking for an instant reversal but to create a modest effect that accumulates over time. If you are encouraged to run, but can only manage a brisk walk, once you add in the effect of this food supplement you could get a better outcome.”

Professor Sakamoto is still searching. He works hard because science is his passion: “How much you really commit yourself to science, to discovering something original and new, I think depends on what you want to achieve. There’s always the opportunity to create balance in your working life but if you want to make a major discovery then I believe you have to commit yourself to achieve it. You may have a balanced life and do some good science but then you may not discover something spectacular unless you are very lucky,” he says.

“When I was in the US I met several star scientists. People who could tell an elegant story about their research filled with logic and humour from beginning to end. I’d often wonder, is that really it? Did you really get to the bottom of the problem and solve the story? And then peers would eventually find the holes. Behind the elegance there were often holes. In Dundee, the science is so genuine. If you have one research problem, in PPU you’ll find the approach, skill and equipment to create many ways to solve it.”

Professor Sakamoto describes the importance of each paper to his research.

“This is the first significant work (Bouskila et al.) after I established my own group in the MRC Unit and also is the work of my first PhD student. It was known for over 40 years that glycogen synthase (GS) is activated allosterically by glucose-6-phosphate (G6P) and by dephosphorylation through insulin-induced inactivation of GS kinase-3. However, the importance of the allosteric regulation of GS was unknown due to lack of a genetic handle on this process. We identified a key amino acid residue required for the activation of GS by G6P and then generated a “knock-in” mouse in which the normal form of GS was replaced by the G6P-insensitive mutant, which was still capable of being activated normally by dephosphorylation. The work provided compelling in vivo evidence that the allosteric activation of GS is a major mechanism by which feeding/insulin promotes glycogen accumulation in muscle. In the second paper (Von Wilamowitz-Moellendorff et al.) we took a similar approach and demonstrated that the same mechanism functions to control liver glycogen levels.”

Mechanism of action of Compound-13: an α1-selective small molecule activator of AMPK.

“This was the most significant and satisfying work I did when I was a postdoc in Dario Alessi’s group. This study provided compelling genetic evidence that the tumor suppressor LKB1 is the major upstream kinase for AMPK in skeletal muscle. The work showed LKB1 is essential for activating AMPK in skeletal muscle during exercise/contraction and LKB1-AMPK pathway plays an important role in contraction-mediated muscle glucose uptake. This one is really memorable, as we were competing with three other groups in US at the time and also it was the most black & white data I got during my career at that time.”