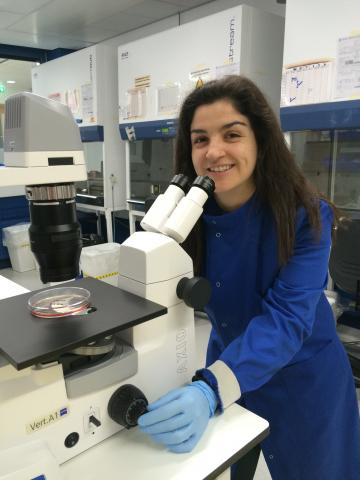 Rosalía’s stem cell research is beginning to show how signalling pathways coordinate pluripotency and differentiation in stem cells. She is in her third year of a postdoc in Dr Greg Findlay’s group at MRC PPU. Rosalía won prizes for her both her undergraduate and postgraduate work at the University of León.

Rosalía says: “I’m fascinated by how a whole organism can develop from a single cell. The human body has so many different cell types and tissues, it requires a lot of organisation. How that organisation is established from the beginning of life to the end really interests me.”

About stem cells: The first cells in an embryo have the capacity to go on to develop into any one of the many different cells that build the body. Scientists call stem cells with this ability pluripotent.  Stem cells hold huge treatment potential because of their ability to transform into different cell types, a process known as differentiation. Before scientists can develop stem cell based therapies they need to figure out how pluripotency works. Rosalía uses embryonic stem cells from mice to understand more about the signalling pathways that control how, when and why stem cells change into other cell types.

Rosalía is the primary author of a paper published earlier in July that details some of the molecular mechanisms that co-ordinate the switch from a stem cell that can become any cell type to a cell set to become just one cell type. It made the front cover.

2006: Bachelor of Science in Biology, University of León, Spain including one year as an ERASMUS student at the University of Uppsala in Sweden.

As a scientist you see things nobody has ever seen before. I think being a researcher is a good job because you are always learning. One day you are looking at a signalling pathway, the next you need to write a project proposal so the opportunities to learn are broad. Every day is a challenge, that’s what I really enjoy, that every day can be different.

I was lucky when I did my first screening experiment here because I found a really clear effect, I was surprised it was so clear. One hundred percent of the time I tried the experiment it happened, so it made me feel really confident about the finding straight away.  I found a small molecule called JQ1, that blocks a family of proteins called BET bromodomains, prevents differentiation of stem cells into endoderm, which is an important step on the developmental pathway towards formation of the liver and pancreas. I then set out to determine how these proteins regulate stem cell signalling and what role they play in stem cell biology.

I consider myself more of a cell biologist than a biochemist. I am surrounded by biochemists though which I like because I’m learning a lot from their different point of view. In my PhD research in Spain we used cellular models to investigate the biological function of a particular protein. Here we are more interested in how biological processes are regulated by signalling pathways so here it’s more from the molecular point of view.

I’ve come from a small lab in a small university so research is quite different for me here. Most of the Professors in León are involved in teaching so they don’t have as much time for research. As a PhD student I was also involved in teaching and it was a good experience. Here research is the whole focus so you learn a lot quickly. The facilities are fantastic here but I would not mind returning to Spain sooner or later to be near my family.

In science you can do what you do anywhere as long as you have the resources. There are variations in the way research institutes work in different places but in the end, science speaks a universal language so you can go to other places and take your work with you.

Microscopes are important in my work. When I look through the microscope I see how the cells are doing, if they are growing well and look healthy, if they show the expected morphology or if there is some sort of unwanted bacterial or yeast contamination. Most of our experiments start when we plate the cells, everything comes from there.

I did my undergrad in Spain but had one year of ERASMUS in Sweden. I studied in my home town so it was the first time I had been somewhere else, living in Uppsala was a good experience. The teaching at the University there was completely different to home and I was involved in a research project for the first time. I was in the last year of my degree and they gave us small projects so we could go into a lab and start to learn techniques and solve problems.

I moved back to my home town for my masters and PhD but during my PhD I went back to Uppsala to a completely different lab. I was working on cellular aggregates in angiogenesis at the time and there was a group in Uppsala working on it using a different technique that I wanted to learn. I then showed other people in the lab in Spain how to do it too.

You have to learn to cope with the frustration of experiments not working or else you couldn’t be a scientist. Many experiments don’t work, sometimes it just doesn’t work technically or the worst thing is when you are trying to find something and realise you aren’t looking in the right place. That’s a good lesson to learn though.

When an experiment doesn’t work there are two approaches for me. One is try it again immediately, the other is think about it and then start again from the beginning. It’s good to have different parts of a project running at the same time, some that are working and some that are more challenging, so if one doesn’t work you still have back up.

Very rarely do you find something that is going to completely change a way of thinking. It’s the little pieces we can contribute as scientists, the solutions that add to the main knowledge, I think that’s what’s important. Teaching is something that I’d also to do more of in the future, but my ambition with research is to really understand some details of stem cell biology. At the end of the process, or of my career, to be able to say I understood this and I found this, for it to be really clear how some signalling pathways work in development and in stem cell biology, that’s what I’d like to achieve.