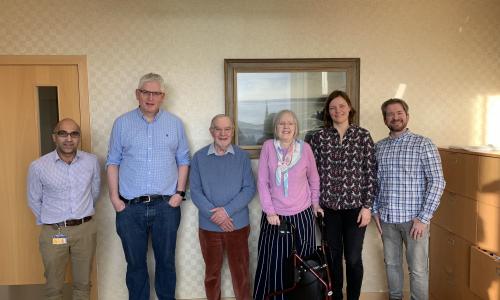 Emeritus Professor Pierre Descouts (Universite de Geneve) and his wife Christine visited the MRC Protein Phosphorylation and Ubiquitylation Unit to meet with Dario Alessi, Miratul Muqit, Ian Ganley and Esther Sammler to hear about their exciting research into the causes of Parkinson’s and to go on a tour of the laboratory. The couple knows first-hand what it means to live with the condition and had decided to make a donation of £10,000 towards the research programme of Esther Sammler who also works as an honorary consultant neurologist for NHS Tayside. Esther commented that she was overwhelmed by Pierre and Christine’s generosity and that their inspiring donation will be used to kick start a new translational project in the lab