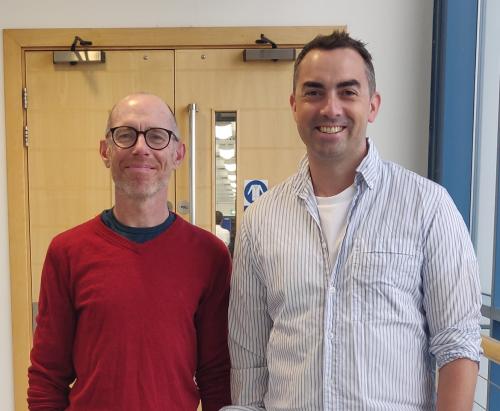 UFM1 is a ubiquitin-like protein conjugated to ribosomes and is important for secretory protein biogenesis and endoplasmic reticulum homeostasis. For this to occur, mature UFM1 must first be generated through the proteolytic removal of amino acids at the C-terminus of UFM1. However, the enzyme responsible for this process in humans has remained elusive. A new paper from researchers in the Kulathu lab published now in Cell Reports identifies UFSP1 as the UFM1 activating enzyme.

The project built from an intriguing observation Stephen Matthews made while working on UFM1 in T cells. UFSP2 is thought to be the only active UFM1-protease in humans responsible both for UFM1 maturation and removing UFM1 off substrates. However, Dr. Matthews observed that UFM1 maturation was unaffected in T lymphocytes lacking UFSP2 and surprisingly these cells had increased UFMylation. This observation led the group to postulate the existence of yet-to-be discovered UFM1-specific proteases.

To test this hypothesis, Steve with the help of Dr. Axel Knebel established a screening system that applied fractionated human cell lysates to a UFM1-GFP fusion protein to detect proteolytic activity in cell extracts. This led to the eventual identification of UFSP1 as an active UFM1-specific protease through mass-spectrometry analysis. This was a completely unexpected finding since UFSP1 is annotated as an inactive pseudogene in humans. However, analysis revealed that UFSP1 is translated from an upstream non-canonical start site and is indeed an active enzyme. This finding rectifies the long-held misconception of UFSP1 as a catalytically inactive protease in humans.

David Millrine, another member of Yogesh’s group set about establishing the biological functions of UFSP1 and UFSP2 using knockout cell-lines and biochemical analyses. These analyses identified unique substrate preferences of UFSP1 when compared with the other UFM1-specific protease, UFSP2. Alphafold modelling by Sven Lange indicated that UFSP2 binds to ODR4, a transmembrane protein at the endoplasmic reticulum (ER). Tom Cummings used biochemical fractionation to show distinct sub cellular localization for UFSP1 and UFSP2. They confirmed that while UFSP2-ODR4 acts at the ER-membrane to directly remove UFM1 from ribosomes, UFSP1, which lacks the ODR4-interacting domain, is limited to the cytosol where it serves as the dominant enzyme responsible for UFM1 maturation. These studies establish a division-of-labour paradigm for the dynamic cycling of ribosomal UFMylation by UFSP family proteases.

Intriguingly, the group also identify UFC1, the pathway E2 enzyme, as a substrate of UFSP1. UFSP1 negatively regulates UFC1 auto-UFMylation at a site close to the catalytic cysteine. Modification of this site in related ubiquitin E2 enzymes inhibits them suggesting the possibility that UFSP1 may have an additional function to remove this inhibitory modification from UFC1 to activate UFMylation. Overall, these studies establish a new regulatory circuit in the UFM1 pathway and localization-dependent functions for the two UFM1-specific proteases. This work lays the foundation to understand the biological roles of this enigmatic posttranslational modification that is essential to support animal development and maintain ER homeostasis.

This work was funded by European Research Council, UKRI BBSRC and MRC, and the Lister Institute for Preventive Medicine.