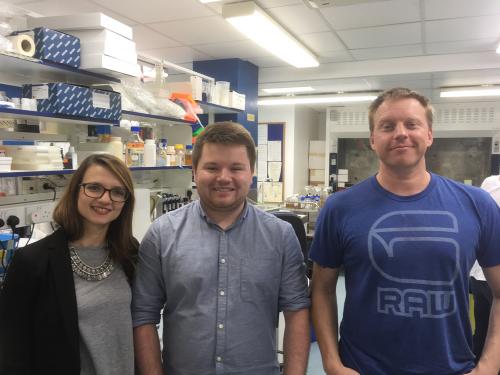 Targeted destruction of specific target proteins in cells is extremely desirable in research and facilitates investigations into their functions. The Affinity-directed PROtein Missile (AdPROM) system, described by the Sapkota lab in Open Biology, combines the CRISPR/Cas9 genome editing technology and proteolysis to achieve a robust degradation of potentially any endogenous protein in cells. The AdPROM system for proteolysis consists of two simple steps: i. generation of cells in which the target protein is knocked in with a Green Fluoroscent Protein (GFP) tag on both allelles using CRISPR/Cas9; and ii. expression in these cells of the AdPROM proteolytic system, which consists of an anti-GFP nanobody tethered to the Von Hippel–Lindau (VHL) protein, a substrate receptor of CUL2 E3 ubiquitin ligase machinery. The expression of the AdPROM proteolytic system into cells causes the selective degradation of the target GFP-tagged endogenous proteins through the ubiquitin proteasome machinery. This elegant AdPROM system is very simple in that it can be packaged onto a single plasmid vector, easily adaptable into an inducible-system, and robust at achieving protein degradation.

Luke Fulcher, PhD student in the Sapkota lab, demonstrated the efficacy of AdPROM proteolytic system for the destruction of GFP-VPS34 in HEK293 and PAWS1-GFP in U2OS cells, which were generated by Annika Hornberger (Alessi lab) and Polyxeni Bozatzi (Sapkota lab) respectively. Thomas Macartney (DSTT) was instrumental in designing strategies, developing methodologies and rapidly generating all the constructs needed for CRIPSR/Cas9 knockins and the AdPROM system.

The paper can be accessed here.