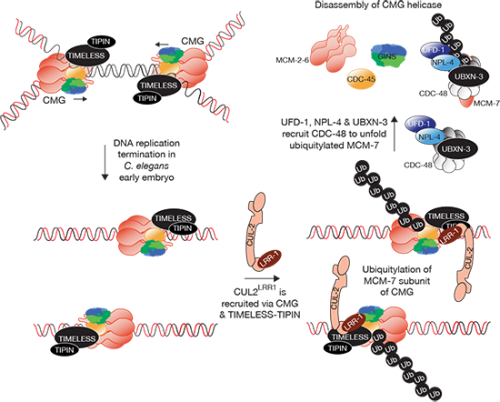 In a new paper just published in The EMBO Journal, Yisui Xia, Ryo Fujisawa, Remi Sonneville & Tom Deegan from Karim Labib’s group in the MRC PPU have revealed the mechanism of replisome disassembly in animal cells, using the nematode Caenorhabditis elegans as a model system.

DNA replication in eukaryotic cells is executed by the replisome, a large dynamic molecular machinery.  At the core of the replisome, the replicative helicase CMG (Cdc45-MCM-GINS) remains tightly associated with DNA replication forks throughout elongation, since it can only be loaded around DNA once during replication initiation. The highly stable association of CMG with replication fork DNA indicates that the key step of replisome disassembly is CMG disassembly. Karim Labib’s group have spent the last decade studying the mechanism of CMG disassembly during replication termination in eukaryotes. Previous studies from the lab showed that CMG disassembly is triggered by ubiquitylation of the MCM7 subunit of CMG, which in animal cells is driven by the cullin-RING E3 ligase CUL2LRR1.  Subsequently, ubiquitylated MCM7 is unfolded by the CDC48 / p97 ATPase, thereby driving replisome disassembly.  Until now, the mechanism of MCM7 ubiquitylation by CUL2LRR1 was poorly understood.  Similarly, the disassembly of ubiquitylated CMG by metazoan CDC48 / p97 had not been studied in mechanistic detail.

In this study, Xia et al combined in vitro reconstitution with in vivo studies in early embryos of C. elegans.  The process of replisome ubiquitylation and disassembly was reconstituted in vitro with 20 purified proteins, comprising 46 polypeptides. Xia et al showed that a replisome component called the TIMELESS-TIPIN complex is required to recruit CUL-2LRR-1 to the CMG helicase and thus promote efficient ubiquitylation.  CUL-2LRR-1 then directs a suite of ubiquitylation enzymes to ubiquitylate the MCM-7 subunit of CMG.  Subsequently, the UBXN-3 adaptor protein directly stimulates the disassembly of ubiquitylated CMG by the CDC-48 / p97 ATPase.  Xia et al show that UBXN-3 is important in vivo for replisome disassembly in the absence of TIMELESS-TIPIN.  Correspondingly, co-depletion of UBXN-3 and TIMELESS causes profound synthetic lethality.  Since the human orthologue of UBXN-3, FAF1, is a candidate tumor suppressor, these findings suggest that manipulation of CMG disassembly might be applicable to future strategies for treating human cancer.

This work was funded by the Medical Research Council, Cancer Research UK, the Japan Society for the Promotion of Science, and the Wellcome Trust.