Visiting Student From Yale In Conversation with DRIG Members 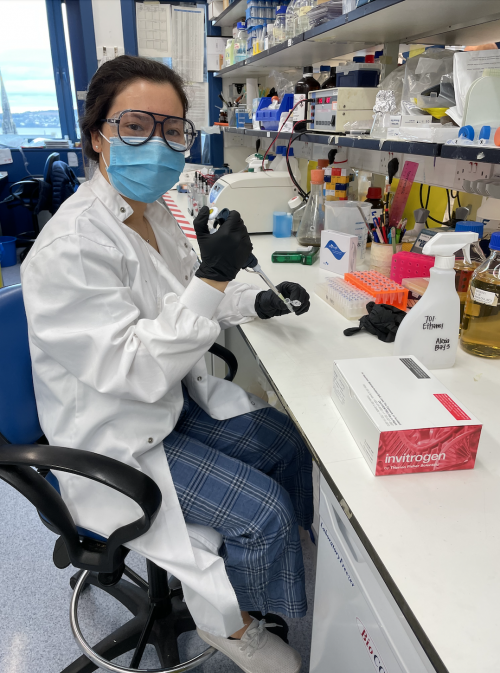 I have worked in several research labs before, but I have never had the opportunity to speak and collaborate with people diagnosed with the condition that I am researching. That is, until now, when I had the privilege to speak with Marc van Grieken and Brendan Hawdon, both committee members of the Dundee Research Interest Group (DRIG).

My journey from being a first-year undergraduate student at Yale University to working in Dario Alessi’s lab here in Dundee was an unconventional one. I am studying molecular biology at Yale, but after finishing up my first year of studies, with the pandemic preventing me from returning to in-person studies, I decided to take a gap year with the hope of finding research experience abroad. I thought doing so would be a more fulfilling experience than taking online classes from my home in New York. A professor of mine at Yale recommended several labs throughout the UK, but I was instantly drawn to Professor Alessi’s lab here in Dundee because his research is highly respected in his field, and just as importantly, I sensed that he would also be a wonderful mentor. A stipend from the MRC PPU with matched funding from specific fundraising efforts for research into Parkinson’s disease at the MRC PPU is now supporting my work in the Alessi lab for the next six months.

I became interested in research into neurological disorders because members of my own family have been impacted by these conditions. My grandmother and great aunt passed away having been diagnosed with Motor Neuron Disease and Alzheimer’s Disease respectively, and another relative was recently diagnosed with Parkinson’s. These personal experiences motivated me to conduct research in the field of neurological disorders and inspired me to seek research opportunities where I could make an impactful contribution.

My previous experience has been that it all too easy to get “lost” in the research, in such a way that I can fail to truly appreciate why the research I am conducting can have a meaningful and significant impact on the lives of real people. At its core, the objective of most scientific research is to find a cure for a particular disease. However, a researcher can become so deeply involved in studying a single protein or analyzing a specific molecular interaction that she or he can lose sight of the greater purpose of the research. I believe that a main reason why this happens is because researchers do not often have the opportunity to speak and interact with patients affected by the disease that they are studying. Without this human component, and this crucial face-to-face interaction with patients that physicians have on a regular basis, it can be difficult for researchers to realize how substantial an impact their work can have on the lives of these patients and their loved ones.

Having had the privilege to speak with Marc and Brendan was an amazing and unique opportunity that I have not had in previous labs. At the conclusion of our meeting, I believe we learned something new and important about each other. I was able to explain my research on Parkinson’s to Marc and Brendan in a way that is understandable to people without a background in biology. I feel that an important aspect of being a researcher is having the ability to explain complex science research without using complicated scientific jargon, yet still being able to describe the research, its goals and its findings in an accurate and comprehensible manner. Being able to do this effectively allows people with non-science backgrounds to more easily appreciate and become excited about scientific research, which is beneficial for everyone! Not only did Marc and Brendan learn about my research on Parkinson’s but, for me, it was so moving and meaningful to hear them speak about what it is like to live with the disease and what motivated them to be involved in Parkinson’s research. They also introduced me to an amazing book, Ending  Parkinson's Disease, as well as a campaign taking place in the U.S. that is trying to bring greater awareness to Parkinson’s by sending letters and emails to the President.

This experience has allowed me to appreciate the importance of fostering and maintaining ongoing partnerships between researchers and Parkinson’s patients. I am very much looking forward to continuing my conversations and alliance with Marc, Brendan, and other members of the Dundee Research Interest Group.