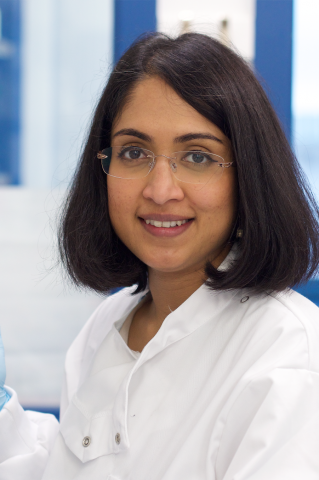 Mahima hails from Bangalore, India, and studied Biological Sciences and Biotechnology in the Birla Institute of Technology and Sciences, Pilani in Rajasthan, India. For her PhD, Mahima moved to Wolfgang Schamel’s lab at the Max-Planck Institute of Immunobiology (MPIIB) in Freiburg, Germany, where she studied the biochemistry of the T-cell receptor.

To gain a broader understanding of the cellular roles that T lymphocytes play, Mahima joined Adrian Hayday at CRUK’s London Research Institute, funded by both EMBO (2009) and Marie-Curie (2010-12) postdoctoral fellowships. Here, she worked on intestinal immune surveillance and also showed that a major function of intestinal intraepithelial lymphocytes was to boost the antiviral resistance of epithelial cells. In 2013, Mahima moved to the University of Dundee as an independent investigator with Doreen Cantrell, where she uncovered roles for the novel post-translational modification, O-GlcNAc, in T cell lymphomagenesis and T cell development.

In December 2016, Mahima started her own research group in the MRC-PPU, to pursue her research interests in the function of Intraepithelial lymphocytes and their communication with intestinal epithelial cells. In 2017 Mahima was awarded a Sir Henry Dale Fellowship by the Wellcome Trust.