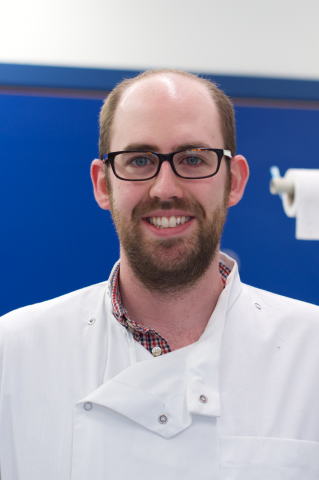 Dr Sam Strickson is about to make the move from academia to industry. In September he’ll join the postdoctoral programme at MedImmune, Astrazeneca’s biologics research and development arm, in Cambridge. He’s looking forward to cycling around a city flatter than Dundee.

Sam says: “I think people quite like it when a paper based on negative data is published, every scientist must have so much negative data. If an idea is dogma in the field, you test it and get the opposite answer you might feel like you can’t publish your work because it’s going to be different. But that’s what my most recent paper did.

Previously it was believed that the enzymatic activity of the protein we studied, TRAF6, was key to all of its functions including those linked to the innate immune system, but when we made a mouse that didn’t have any of the enzymatic activity it developed a different disease from the one expected. This was the turning point in our understanding of the protein and how it works.”

Sam is part of team from Professor Sir Philip Cohen’s lab who published a paper in June this year overturning previously held ideas about how the TRAF6 protein works.

Roles of the TRAF6 and Pellino E3 ligases in MyD88 and RANKL signaling is published in Proceedings of the National Academy of Sciences.

Favourite research tool: The real time quantitative PCR machine. It reads 384 samples at a time using fluorescence to measure how much DNA is in each sample. The concentrations help Sam figure out signalling pathways in the immune system.

We made a knock-in mouse that took away all the enzymatic activity of TRAF6 and the mouse was fine. Some people had said that enzymatic activity was key to all the functions of the TRAF6 protein. It turns out it’s mainly a scaffolding protein that acts to recruit other proteins. Its enzymatic activity is important for some biological processes but it’s involved in about 20 pathways. By making that mouse we stumbled on that fact that actually this protein has a role in the adaptive immune system and we were mainly concerned with the innate so it was unexpected and interesting.

I still want to do a lot of basic research which is why I’ve decided to do a postdoc in industry, I’m really excited about it. I’m going to join the respiratory, inflammation and autoimmunity department at MedImmune to work primarily on asthma and chronic obstructive pulmonary disease. Two disease that are only going to get worse. We have an ageing population of smokers, particulate pollution and people increasingly taking up smoking in developing countries.  The lab is interested in a signalling pathway that’s regulated by IL33. It’s quite a good marker for people who have asthma or COPD. When their cells are damaged they release IL33 as a sort of signal, we call it an alarmin, to show there’s a problem. They’ve been trying to find out which components are in that signalling pathway to work out if there’s any new drug target potential. The IL33 signal recruits a lot of other immune cells that go on to destroy the tissue and don’t actually help, instead you get a chronic inflammatory response. It’s hyperactive in people with asthma or chronic COPD.

It felt a bit like I did two PhDs in one. I stayed on in the same lab after I finished my PhD because I published the first project I was working on quite early on so I moved onto another project half way through. Towards the end I started to get some really nice data and whilst I was writing- up we received the knock-in mouse. The mouse was key to it all so I decided to stay on and keep looking into it. The data was published just last month, the paper got good feedback and was recommended by F1000Prime so it was worth it.

Knock-in mice are a powerful research tool but you can’t just do your experiments off the cuff. You have to think very carefully about what you are doing when you are using a living creature.  Cell cultures are useful because you can do whatever you want in terms of scale, but you always need to back up your results with knock-in or knock-out mouse data.

Time in the lab is all dictated by your experiments. Normally the evening before I’ll plan what I’m going to do the next day and see where it takes me but I don’t think I’ve ever stuck to my early plan. It could be that other people in the lab need your help, or there’s meetings or seminars, it’s all quite exciting, I like it, the time just flies by.

In our lab, every week we send a report to our supervisor so you want data that works. If experiments fail you worry about not having enough data to show. You can certainly learn from every experiment and hopefully you won’t make the same mistake twice. There’s mistakes where you just put the wrong reagent in, or you use the wrong cells, or you’ve pipetted the cells into the waste beaker by accident and then there’s things that just don’t work.

I’ve helped with outreach at science festivals and open doors days. It’s really good fun. I don’t know how much science the kids get from it but it’s clear they like making plasticine cells, I think it plants a seed and I’ve learnt you can’t underestimate their questions. They come so far from left field, you don’t expect children to ask questions like that.

A PhD can be really fun because it’s your own project and you can take it in whichever direction you want, obviously with input from other people and your supervisor. I’ve enjoyed doing a PhD somewhere that is so well funded. It means you are limited only by what experiments you can think of. The other good thing about working in the School of Life Sciences in Dundee is that there is an expert in everything. You can send a school-wide email if you need help with something and someone will always reply within five minutes saying ‘yes I’ve done this’ or, ‘yes I have this reagent’.

As an undergrad I didn’t really want to be a scientist but one lecture in my third year at Glasgow changed everything. Professor Miles Housley spoke about cell signalling pathways and I thought it was cool how one protein can influence another protein which in turn activates it. From there on I was hooked.

I got really into phosphorylation and cell signalling and then found out about PPU. I read a lot of papers that came out of here, they were all really methodical, you could tell they’d thought really carefully about the experiments, they had nice controls which I think is key. So many labs publish wishy washy methods making it hard to replicate but from here it was gold standard and I really liked that.

I did two summer placements during my biochemistry degree, one funded by BBSRC and another by Nuffield. It meant I could do science instead of a summer job temping in the Bank of Scotland where my main duty was to say RBS is next door. The funding meant I could do something that would help with career development. The professors I met gave me references for PPU that showed I had the skills they wanted.

At first, in my mind, cell signalling was like a four-piece jigsaw because I had only read a few papers about it. Now it’s so much more complex, it’s like a 3D or 4D jigsaw where everything intertwines with one another with edges that could keep going forever. You think ok we’ve got it down to phosphorylation, ubiquitylation, sumoylation, then we had a seminar last week about coAlation, it’s a whole new post translational modification and you do think ‘oh dear, how does this fit in?’, but it’s interesting. There are so many different types of post translational modification you have to try and figure out how it all fits into your experiment. I’ll be able to keep exploring it at MedImmune.

Start with the area you found most interesting in your undergrad if you want to do a PhD. Think about which courses or lectures you understood most, there will probably be a dedicated lab if not a unit or institute that works on it. From there go and read some papers that come out of the lab, see if you understand them and if you’ve done any of the techniques they use. Don’t be scared to email a prospective supervisor to say you are interested in their work. It shows initiative and they like to hear from people who want to work in their lab. Sometimes a description of a PhD is only a few sentences long so it’s always worth asking to learn more about whether it’s for you.

If I’m talking to someone and they don’t really know what I do I say I work on inflammation, but I don’t. I work on a distinct signalling pathway that eventually leads to inflammation. Sometimes as a scientist it can feel like you aren’t really studying a disease properly if you aren’t looking at the end point, but then I hope that any small finding I make will add to things globally and help in the long run. You can’t just say ‘I’m going to cure cancer’ and do it in the lab, medical research is a collaboration between hundreds of thousands of people.

I like being in the lab doing basic research, for me it is the most fun bit of being a scientist. I get a bit bored just sitting at my desk, it was a real struggle to write my thesis, I like to be on my feet in the lab. I don’t like sitting for longer than 5 minutes.

Dundee is so close to the Highlands, you can go skiing, run, cycle and of course you can go to the pub. I think that’s key especially during your PhD to blow off steam and share stories from the trenches, even though you’ve heard them time and time over, it’s still really fun. One of the best things about this place is the people, it feels like one big family.

I think if you’ve made it in the PPU you can go anywhere. It would be a mistake to come here and not know it’s going to be hard work, probably harder than a PhD elsewhere, but the rewards are great and the funding means if you have the ideas you can explore anything.