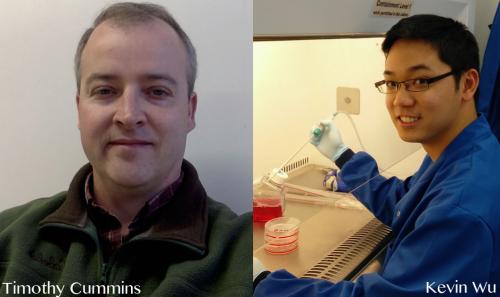 The ability of cells to move is crucial for many biological processes during development, and for normal tissue growth and repair. Cancer cells can usurp normal cellular processes and make them hyperactive, which leads to inappropriate cell movement that can contribute to metastasis. Understanding the molecular processes that regulate cell migration could uncover novel therapeutic targets against diseases such as cancer.

Recent research findings by Dr. Tim Cummins and Dr. Kevin Wu from the Sapkota lab have uncovered key roles for the protein PAWS1 (which was discovered in the Sapkota lab as Protein Associated With Smad1) in controlling cell migration. The research revealed that PAWS1 governs the organisation and integrity of the cellular skeleton by cooperating with another protein called CD2AP, which was previously known to contribute to the polymerization of actin, the building blocks of the cellular skeleton. When either PAWS1 or CD2AP is removed from the cells, the cellular skeletal integrity is broken and consequently, the cells lose their ability to move. The findings suggest novel functions for PAWS1 in regulating cell shape and movement.

Dr. Cummins has now started his own research group at University of Louisville, Kentucky, USA. Dr. Kevin Wu’s current research in the Sapkota lab is focused on understanding how mutations in PAWS1 gene cause hereditary skin diseases.