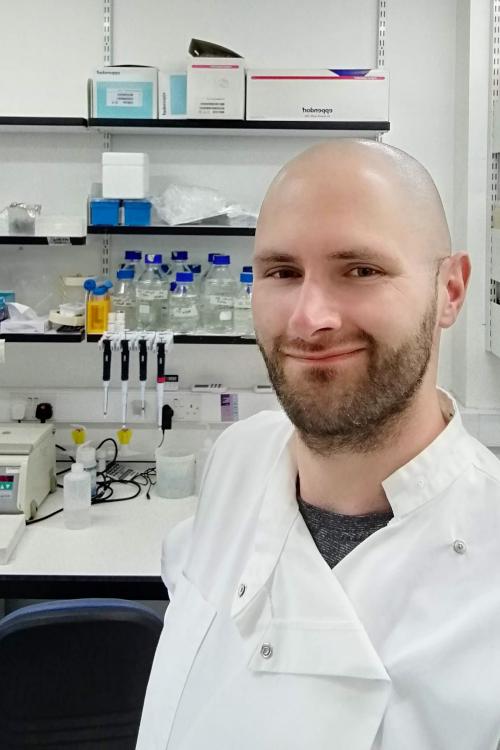 The Sapkota lab developed the Affinity-directed PROtein Missile (AdPROM) system for targeted degradation of endogenous proteins inside cells. In principle, by deploying binders of specific proteins attached to destruction signals as “protein missiles”, any intracellular protein can be destroyed rapidly.

K-RAS mutations have long been established as one of the most frequent scourges of many cancers. Yet, the development of K-RAS inhibitors has been extremely challenging, with many in the field labelling K-RAS as undruggable. Therefore, novel approaches to targeting K-RAS inhibition is warranted. Targeted destruction of disease-causing proteins has emerged as a new modality in drug discovery to tackle undruggable targets.

Therefore, the Sapkota lab, through a Division of Signal Transduction Therapy with leading pharmaceutical companies, set out to test whether K-RAS could be destroyed using the AdPROM technology. First, they used CRISPR/Cas9 technology to tag endogenous K-RAS gene with a Green Fluorescence Protein (GFP) in A549 adenocarcinoma cells. By using the GFP-directed protein missile, they were able to rapidly and efficiently destroy GFP-tagged K-RAS from these cells. Next, they obtained a binder of both H- and K-RAS and when they deployed this as a missile, they were able to destroy unmodified H- and K-RAS from cells. The findings are published in the current issue of Cell Chemical Biology (https://www.cell.com/cell-chemical-biology/fulltext/S2451-9456(20)30235-X).

Sascha Roth, a postdoctoral research fellow in the Sapkota lab who led the study, said, “To our knowledge, this is the first time that anyone has shown that endogenous K-RAS can be targeted for destruction! In the future, we still need to develop selective binders of K-RAS or specific mutations of K-RAS to achieve selective degradation of specific disease-causing mutants of K-RAS.”

Dr. Gopal Sapkota, Principal Investigator at the MRC-PPU, said, “The AdPROM system provides a rapid way to test whether specific proteins are valid drug targets and informs rapidly whether protein destruction is a feasible drugging strategy. Now we know endogenous RAS proteins can be degraded, more resource-intensive efforts can be streamlined into developing small molecule degraders, such as PROTACs, as drugs against RAS proteins.” He added, “This work reflects a tremendous team effort from many people both from Dundee and pharma.”

Prof. Dario Alessi, director of the MRC PPU said, “The DSTT is our flagship collaboration between University of Dundee academic researchers and industry. This exciting collaboration has developed innovative methods to efficiently degrade K-Ras for the first time, opening the door for a new approach to treat cancers driven by the KRAS oncogene.”

Related publications from the Sapkota lab: