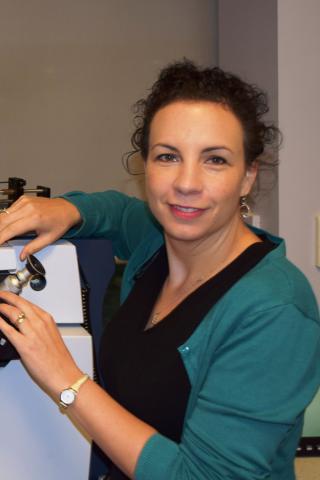 The promise of the proteome

“I’m really excited about where we are going,” says Professor Claire Eyers.

Forget targeting a whole protein and expecting a specific effect. Professor Eyers is using mass spectrometry to sharpen the mark. By looking at intact proteins in a mass spectrometer she can track the many different variants, or proteoforms, a single protein adopts when carrying out its role within a cell. All these proteoforms add together to make the proteome, the complete set of proteins present at any point in a cell, tissue or entire body.

Proteins are constantly modified and this has long been Professor Eyers motivation. “If you target a drug against a protein you will typically hit every proteoform and therefore all functions of that protein. If you can actually target a drug so that it only affects select proteoforms then you will better be able to target a specific role of that protein, rather than generically impacting everything it’s involved with,” she explains.

It was this quest to understand how extensively proteins are modified post-translation that brought Claire Eyers to Professor Sir Philip Cohen’s lab in the then Medical Research Council Protein Phosphorylation Unit (PPU) in 1998 to study for her PhD.

Professor Eyers is now co-Director of the Centre for Proteome Research at the University of Liverpool where she leads the research theme ‘molecular basis of therapeutic targeting’.

There her research follows two tracks. Both centre on mass spectrometry or ion mobility-mass spectrometry - methods of analysing proteins to determine their weight. Mass spectrometry reveals protein structure and shape and so enables researchers to monitor how it changes between proteoforms. In turn this enables better understanding of cell signalling processes.

The first track aims to develop strategies to sequence glycans or sugars. Professor Eyers explains: “This is really exciting at the moment because with sugars it is very very difficult to be able to unambiguously define what the structure is. You’ve not only got the individual building blocks but you need to unravel what the configuration and linkage is. We are starting to be able to do this now using ion mobility-mass spectrometry.”

Then there is using mass spectrometry to understand proteoforms. She uses the study of histones, the proteins that package and order DNA, as an example.

“If you think about histones, they are extensively modified, so they have what is referred to as a histone code. They all have very specific patterns of phosphorylation, methylation and acetylation. People have been studying histone modifications for years and talking about the epigenetic code. I would suggest that the post-translational modification of proteins for 90% of the human proteome has the same potential relevance, we just don’t know how to study it yet and that’s where we want to go. It’s a whole new field,” says Professor Eyers.

Moving away from peptide analysis

Professor Eyers time at PPU introduced her to protein analysis using mass spectrometry. “At the end of my PhD, I had started using mass spectrometry for identification of phosphorylation sites. It wasn’t a major part of my PhD but it was a significant element of the research I ended up including in my thesis. At the time I didn’t really understand the details, if I’m honest, but I did realise the potential that it had for revolutionising understanding of protein phosphorylation,” she explains.

Noticing that mass spectrometry was a technology on the cusp of being applied for high throughout sequencing Professor Eyers sought a postdoc position that would allow her to capitalise on what she had learnt so far. She found a lab at the University of Colorado that was at the interface between protein phosphorylation, cell signalling and proteomics. There she excelled, winning the American Heart Association’s Outstanding Postdoctoral Fellow award in 2004.

Reflecting on her time in the US Professor Eyers says: “I think it’s good to take the opportunity at the postdoc stage of your career to go and work somewhere different. I didn’t really speak any other languages so America seemed like a good choice. The move was partly about location but also because I knew I wanted to understand and develop mass spectrometry as a technology because it held great promise for the future.”

When hiring postdocs herself Professor Eyers looks for publications, enthusiasm and a spark that shows they’ll have their own ideas, “the ability to drive their own projects and follow through on their ideas is crucial,” she says.

Professor Eyers describes her post-doc as a transition phase that enabled her to focus on proteomics - the influence the structure and function of proteins has on the inner workings of every cell in the human body.

Professor Eyers returned to the UK to the University of Manchester where she was awarded a Dorothy Hodgkin Fellowship by the Royal Society in 2007. She used the opportunity to establish her own research group.

“Getting a fellowship is in part about luck but it’s also about drive, commitment, good project ideas and training which Dundee undoubtedly helped me with. I think that anyone who wants to stay in academia has to work hard and has to put themselves in a position that gives them the best chance of being successful in writing grants for their own funding,” she says.

In 2013 Professor Eyers moved to the University of Liverpool where she enjoys the research independence offered by a career in academia. She became Professor of Biological Mass Spectrometry in 2014.

Finding new ways to use mass spectrometry is a critical part of Professor Eyers’ work. She applies the technology she is developing with researchers in a whole variety of disease areas, including cancer, but also works closely with instrument manufacturers. They give her early access to mass spectrometers at the design and build stage.

“We develop mass spectrometry strategies, the methods used to apply technology to research. We don’t take the instruments apart and rebuild, rather we will take early stage or new instrumentation and then optimise the methods so we can better exploit their capabilities for our purposes,” she explains.

A current example is working out new ways of separating proteins in a mass spectrometer. What she is trying isn’t a technique that has been done before. If Professor Eyers and her team can create a new separation method and show how it can be applied to a specific problem then it’s beneficial to the instrument manufacturer, because it demonstrates how useful their product is, but it will also advance her own research.

Access to the expertise of the people who actually build mass spectrometers is incredibly valuable, Professor Eyers explains: “If we can’t do something with software then they might help us to write new code that will allow us to achieve what we’d like to do. It’s a knowledge exchange - we both offer something to help the other.”

What makes a scientist

This push to find new ways of working and improve existing technologies is not unusual in PPU alumni. “As a PhD student in Dundee our supervisors expected a lot of us but their expectations have created a legacy. Every independent academic I know who has been through PPU has such a strong work ethic. I think students outside of Dundee may be surprised at the way we were as PhD students but the environment there made us a lot more productive and go on to do well,” Professor Eyers reflects.

“One thing that Dundee did teach me and I try to re-enforce this with my students is that science is not a nine to five job. You can’t turn off the minute you leave the lab. You will not find a single successful scientist who doesn’t think about work outside of being in the lab or the office,” she says.

Downtime to collate your thoughts is just as important though; Professor Eyers’ advice for aspiring group leaders is to build a life outside the lab too, she says: “Every scientist needs a life, you need something outside of science, because you never know where inspiration is going to take you, you also need it for sanity check. As my life has become busier outside the lab I’m even more focused in my working day.”

In considering the protein as a whole, in all its many possible forms, and by refining mass spectrometry techniques, Professor Eyers is opening-up an entire new field of research. One that hints at better refined therapies in the future. “I really feel that I’m doing my most exciting research right now,” she concludes.

Quantitative Proteomics a book edited by Professor Eyers was published by the Royal Society of Chemistry in 2014.