Cell responses to DNA damage in health and human disease 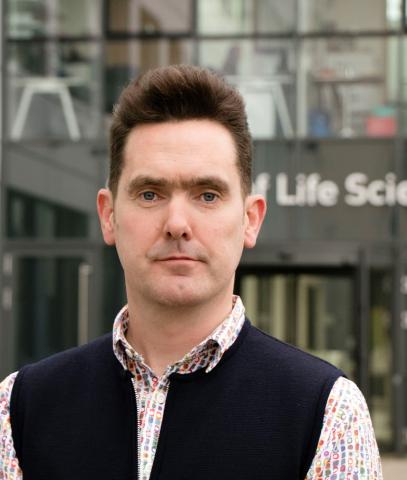 The DNA in our genomes becomes damaged at a high frequency in all cell types – with tens of thousands of DNA lesions occurring in some cell types in a single day. Left unrectified, such a high level of DNA damage could result in a high level of mutation and genome instability, which would in turn compromise gene expression, cell function and life itself.

My team investigates the molecular mechanisms cells use for the detection, signalling and repair of damaged DNA. We’re particularly interested in how cells deal with situations where machines that replicate or transcribe DNA become blocked by DNA lesions – because failure to deal swiftly with these scenarios could result in aneuploidy, genome stability or detrimental problems in gene expression. Over the years we have discovered a range of proteins with crucial roles in DNA repair and genome maintenance, and we’ve studied how these proteins work at the molecular level to promote DNA repair. This includes the SLX4 “molecular toolkit” which removes toxic tangles from chromosomes during DNA repair. We also discovered the FAN1 DNA repair nuclease which suppresses chromosome abnormalities by helping to deal with blocked DNA replication forks.

Mutations in genes encoding proteins that control responses to DNA damage cause a wide range of human diseases. From our own work, we’ve found that mutations in the E3 ubiquitin ligase RFWD3, or in the SLX4 toolkit, which perturb homologous recombination (HR) can cause Fanconi anaemia, and mutations in FAN1 which block nuclease activity cause kidney dysfunction (karyomegalic interstitial nephritis; KIN). Mutations in DNA damage response genes can also cause sterility, cancer, neurological dysfunction, premature aging or death during embryonic development, depending on the pathway involved. So, genome maintenance is vital for human health and well-being. We are currently trying to understand the molecular basis for a range of diseases caused by mutations in poorly understood genome maintenance factors, especially kinases.

CDKL5 – at the nexus of transcription-coupled responses to DNA damage

We identified CDKL5 while screening the human kinome for DNA damage-responsive protein kinases. CDKL5 is poorly understood – the physiological substrates, cellular roles and activation mechanism of this kinase were not known when we came across it. We decided to figure this kinase out. We found that CDKL5 is recruited to accidental (unscheduled) DNA breaks in transcribed regions of the genome where it modulates transcriptional activity, through phosphorylating a host of transcription regulators including elongin A. CDKL5 is not restricted to the nucleus, and in addition to finding the first physiological substrates of CDKL5, we found the first physiological cytosolic substrates too, involved in control of microtubules and centrosomes.

CDKL5 is mutated in a rare, debilitating condition known as CDKL5 deficiency disorder (CDD; OMIM 300203; 300672) characterized by epileptic seizures, severe neurodevelopmental delays, impaired motor, language and hand skills and cortical visual impairment. Current treatments focus on management of symptoms, not the underlying cause of the disease. CDD is rare but we now know that CDKL5 is one of the most commonly mutated genes in childhood epilepsy. Thus, the prevalence of CDKL5 mutations is much higher than thought previously.

Developing rational therapies to treat the root cause of CDKL5–related diseases requires an understanding of the molecular basis of these diseases and the basic functions of CDKL5. In our lab we are working hard to determine how CDKL5 specifically recognizes DNA breaks at sites of ongoing transcription, how CDKL5 activity is controlled, how CDKL5 recognizes its substrates, how pathological mutations affect CDKL5 activity and function, and which of the functions of CDKL5 is most relevant to human disease. We recently discovered that CDKL5 controls transcriptional elongation in a range of genes even without exogenous DNA damage, and we now wish to build on a body of our unpublished data to study intriguing connections between endogenous DNA breaks, poly ADP ribose, CDKL5 and transcriptional control. We’re also keen to understand how disrupting these mechanisms could lead to diseases such as CDKL5 deficiency disorder (CDD) and epilepsy. We also have plans to carry out “molecular rebalancing” screens to correct the molecular signatures associated with CDKL5 deficiency, which could represent the first rational therapies for treating CDKL5-associated diseases.

Mutations in NEK1 cause several different disease aetiologies: amyotrophic lateral sclerosis (ALS; also known as motor neuron disease), spondylometaphyseal dyplasia (SMD), and polycystic kidney disease (PKD). However, the molecular basis for these diseases is unclear. NEK1 has been proposed to be a key modulator of homologous recombination (HR) and genome stability but the underlying mechanisms and the relevant substrates are unclear. It is interesting that the symptoms of SMD are similar to other syndromes caused by mutations in HR genes, but it is not known if SMD is caused by defective HR, and what NEK1 substrates are relevant. Elevated levels of DNA damage have been reported in ALS, but it is not clear of it is a failure in DNA repair that causes ALS in the context of NEK1 mutations. NEK1 is located in the cytosol too, where it controls the function of primary cilia but again the substrates and mechanisms are unknown.

We have started from scratch in trying to achieve a detailed understanding of NEK1, in order to answer the following questions: how is NEK1 activity controlled? What are the physiological substrates of NEK1, and which substrates are relevant to the basic cell processes regulated by NEK1? Which cell processes and substrates controlled by NEK1 are most relevant to the different diseases caused by NEK1 mutations? How do pathogenic mutations affect NEK1 function? How does the regulatory subunit of NEK1 we identified impact NEK1 function? We’re taking a multi-disciplinary approach to answer these questions, and to design rational treatments for the “molecular rebalancing” of NEK1-associated diseases.

The ATR kinase detects perturbations during DNA replication, such as replication fork stalling or collapse at DNA damage sites. A range of tumour types show high levels of “replication stress”, and this is partly why inhibitors of ATR are currently in clinical trials for the treating these (and other) cancers. We have been using ATR inhibitors to understand ATR target selection and function in different cell types, to inform the mode of action of clinical ATR inhibitors.

We’re interested in the contribution that DNA packaging into nucleosomes and chromatin makes to genome maintenance. We’re particularly interested in how histone recycling by histone chaperones modulates processes such as DNA repair and transcription. We recently identified a new DNA damage-responsive histone chaperone that is only poorly understood, and we’re using a range of approaches and experimental systems to understand its role in DNA metabolic processes and genome maintenance. In addition, we’re keen to understand the role of chromatin modulating factors in DNA repair processes that occur during S-phase of the cell cycle, and we’re developing new tools and approaches to do so in intact mammalian cells.

We are also working on several other new genome stability factors we have identified, as well as trying to understand the molecular mechanisms underlying the SLX4 complex, and the E3 ubiquitin ligase RFWD3 that promotes replication-dependent DNA repair.

Collaboration with the pharmaceutical industry and biotechnology sector

We are also exploring the possibility that inhibiting some of the DNA repair factors we work with might be useful from a therapeutic standpoint in diseases such as cancer. Not only are we developing small molecule inhibitors, but also in developing PROTACs that stimulate degradation of key target proteins in specific disease-relevant genetic backgrounds.

We have major collaborations with Merck KgAA, Pfizer and Beactica Therapeutics. The pharma industry funds the research of three members of the team.

There are several values that we care about deeply.

Truth: We want to get to the truths behind the questions we’re asking, without bias or attachment to models or pre-conceived notions. We let our data, and only the data, guide us. We’re agnostic about particular outcomes of our experiments, we wish simply to get to the truth.

Robustness: Generating reliable, reproducible data (and top-notch reagents) that stand the test of time is important to us. We place emphasis on using robust methodologies and multiple independent biological replicates to generate data we can rely upon, from which to move forwards. Statistical robustness is important too. Where possible we use blinding in our experiments to help eliminate bias; in addition, members of the team frequently ask others in the team to test if they can reproduce key findings independently before we move forward.

Openness: We believe that we should be pay attention to all observations made in the course of experiments, without bias or prejudice. When addressing a particular question experimentally, we often find we get the answer to a different question to the one we’re asking, which has sometimes turned out to provide breakthroughs! We deposit all of the source data from our papers on repositories such a Mendeley, although now it’s usually possible to publish source data with each individual paper.

Diversity: It really matters to us in the team that we have the fullest possible representation from the various groups that make up our society. It is our belief that the more diverse we are as a group, the greater the diversity of opinions and creativity we’ll have to draw on, which in turns enriches our science and our productivity. We’re a diverse team with multiple ethnicities, religions and nationalities represented, as well as LGBT+ representation. We welcome applications from students and postdocs in our team of all races, religions (or none), gender identifications, sexual orientations, ages, or disability status. We’re a family-friendly lab, open to flexible working for people with children.

The team is looking for talented, motivated, switched-on, diverse, friendly people to join us in addressing key questions about genome maintenance mechanisms relevant to human disease. We have several positions available; informal enquiries can be made by emailing John Rouse (j.rouse@dundee.ac.uk).