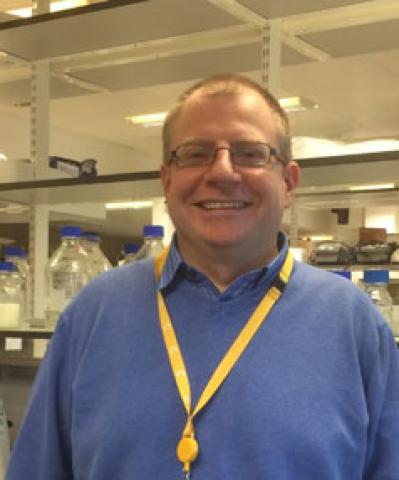 Dr. Darren Cross is already thinking ahead:"To be on a project that gets as far as taking a new drug to the clinic is rare and exciting but we still need to go back to the bench. We have made a cancer therapy that extends lives, but it's only extending not curing. So we need to understand what else we can do."

In November 2015, the US Food and Drug Administration announced approval for Tagrisso; a new treatment for non-small cell lung cancer (Press release). Clinical trials found that Tagrisso reduced tumour size in more than half of the lung cancer patients treated with the drug.

The two and a half years it took from the start of clinical trial to approval for patient use makes it AstraZeneca's fastest ever cancer therapy development programme. Dr Cross helped initiate the project, lead the discovery phase and was involved in the later clinical development phases of the drug. He isn't stopping there.

"Translating the early exploratory side of science into benefits for patients, that's my core motivation,"he says.

"I was at PPU for five years in total and the experience was brilliant. The time I spent in Dundee was a real apprenticeship in how to think about science and solve problems. It gave me a strong foundation in research and grew my enthusiasm and passion for this area of biology. There may not be a better place you could go, especially in kinase signalling,"Cross says of the strong beginning he built at PPU.

It was a kinase signalling pathway that Cross and his colleagues exploited to develop Tagrisso. The programme began in 2009 and Cross was there from the beginning:"I wouldn't take credit for the idea for Tagrisso, that came out of discussions between a group of us. What I did was take the idea and build the programme."

A kinase inhibitor in action

Some lung cancer cells have an abnormal version of EGFR that drive uncontrolled tumour growth. An earlier generation of tyrosine kinase drugs can slow the tumour down by targeting this abnormal EGFR, but over time the tumour will change so that it becomes resistant to these therapies. When this happens lung cancer cells can multiply again and the patient will eventually relapse.

Tagrisso targets the changes in the tumour cells that stop the first generation drugs from working. Cross explains:"Tagrisso is designed to target EGFR-T790M a mutation that makes tumours resistant to existing EGFR lung cancer drugs like AstraZeneca's Iressa. So when the tumour starts to grow again, Tagrisso can help to extend a person's life if their tumour has the T790M mutation.

From early exploration to extending lives

Cross has always had a role in early discovery and research. Once the Tagrisso project moved past the discovery phase he says it was a whole new learning curve:"Once you get to the clinic new teams get involved and it has been fascinating to gain a broader remit, but I'm in a fortunate position because I can keep my research work going too"he says.

Cross is still involved at the bench where he leads on exploratory work. Despite development of Tagrisso to win the battle against the T790M mutation, the tumour, he says, is still winning the war:"These kinase-targeting drugs are effective but aren't curative. After about a year of treatment, patients will eventually relapse. Tumours find ways to get around treatments, so we need to find ways to keep blocking and inhibiting tumours. We need to learn even more about the biology to carry on fighting the disease."

It is extremely important to Cross that the effort he puts into scientific research eventually enhances other people's lives. Although he works in the early pipeline stage, he does interact with patients in person through events AstraZeneca arranges for its researchers.

Cross describes the impact:"There was a patient from Manchester who was on the drug who visited and spoke to our team. Hearing her talk about her life first hand was both motivational and emotional. The benefit cancer therapies offer is too often short-lived. Eventually a patient will relapse and die so we need to go back to the bench to understand what else we can do. Seeing patients who benefit from these drugs is massively motivational."

From academia to pharma

Reflecting on his move from academia to industry Cross cites research related to people as a driver:"I reached a fork in the road, try to become a Principal Investigator in academia or go into industry? I wanted to build on the strong science I gained from my time at PPU but in such a way that I could use that knowledge to the benefit of people. I really wanted to make my science directly applicable to patients. In academia you can do things that are very much exploratory but in industry it is usually more directly applied."

The networks he built in his time in Dundee were important too. His first job in the pharmacetutical industry was at SmithKlineBeecham helped in part, he says, by the connections he made during his PhD as well as his expertise in kinase biology.

"The advantage of Dundee is the industrial links Professor Sir Philip Cohen, Professor Dario Alessi and the rest of the team there have built. The unit's consortium side is a massive opportunity for people that helps to open doors. It's a small community and you can build strong relationships from academia if you'd like to move into industry,"he explains.

Science is a way of life

Cross acknowledges that the demands of a research career can be all consuming:"If you are sufficiently passionate and driven, science is a way of life. The nature of scientific research means there is always something else to do. I am passionate about wanting to make a difference to people who live with illness. This drive, together with work pressures, does mean I can end up working a lot and this does have an impact on work/life balance. But I do still think people can ultimately try to manage it and can choose what balance they want to take."

His advice to PhD students and postdocs following in his footsteps:"It is important to set goals that are realistic versus the time you are willing and able to invest. It's not about working longer or harder but working smarter. Focus, set objectives, think hard about what expectations are and then stick to it knowing that there will always be another experiment to tempt you away!"

"I like to work with energetic and passionate people who will push boundaries together, PPU was a great place to start."