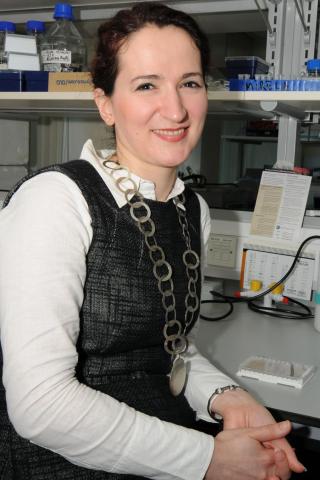 Diabetes at the heart

Diabetes, heart disease and ageing are woven together in a tangle of signals that Professor Mirela Delibegovic is determined to tease apart. “I want to understand what causes insulin resistance, how it can lead to cardiovascular disease and find ways to reverse or postpone these conditions.”

In her lab at the University of Aberdeen, tyrosine phosphatase proteins are under scrutiny from every angle. This superfamily of enzymes control signals that keep the body working at a cellular level to support diverse functions like appetite, memory and the immune system.

Her initial focus on signals linked to type 2 diabetes has grown to encompass research on artery-blocking plaques made of fat and the impact of phosphatases on body-wide inflammation. Her team is looking at treatments designed to reverse or postpone both heart disease and conditions linked to the immune system. She revels in this diversity. “I have a lot of interests. Some projects will work out, some won’t, but I’m hoping now I’ve reached a stage where we have the research findings to support work translatable to people. I’m trying to find clinical collaborators.”

Everyone in Professor Delibegovic’s team has a project they are passionate about backed up by one she describes as safe and deliverable. It’s a strategy she learnt as a postdoc at Harvard. Project goals are diverse but all relate back to the action of tyrosine phosphatases.

Ageing hasn’t escaped her attention either. Why do we age? Can we slow down the ill-health aspect of ageing? What role does cognition play? These are all questions Professor Delibegovic is trying to answer. “We know that obesity and insulin resistance influence how the mind works because we’ve seen the signalling pathways and cascades interact,” she says. “My hope is that the research we are doing now will lead to simple, achievable therapies that tackle diabetes and its complications in the future. Treatments don’t have to be drug based. Nutritional options have huge potential too.”

Professor Delibegovic looks for similar verve in potential collaborators: “When someone is enthusiastic then I always say yes and find a way to make the collaboration work.”

As a PhD student in Professor Tricia Cohen’s lab at the Medical Research Council Protein Phosphorylation Unit (PPU), Delibegovic concentrated on the way hormones influence development of diabetes. She identified a phosphatase regulated by insulin and showed how the interactions of another have the potential to lead to diabetes in later life.

She talks about her PhD as one of the most enjoyable times of her life: “It was very international and that’s something I absolutely loved about Dundee. We shared a common work ethic and grew into a family. At MRC PPU, you were expected to work hard and everyone did, but we also played hard. We worked hard because we wanted to get more data, to find answers and to deliver on time. What I learnt most is that hard work really does pay off. And that you must take time to reflect on what you have done.”

Professor Delibegovic married a fellow PPU PhD student, Nimesh Mody and they continue to work together today. “One thing we did learn in Dundee is that actually our research collaboration works really well. We have shared weekly lab meetings and run the team as one big lab, though Nimesh is on the 5th floor and I’m on the 6th floor.”

The Division of Signal Transduction Therapy meetings were another highlight of her time in Dundee. The quarterly research presentations to pharmaceutical companies taught her the importance of collaboration beyond academia:

“Thanks to my time at PPU I have an awareness of how to work with industry and know that it’s a valuable thing to do,” she says. “There are still academics in the world who like to keep to themselves but I think if you want to be successful you have to be open minded and just see the big picture. The whole point of research is that we are finding out things that ultimately may enable pharmaceutical companies to deliver new drugs. At PPU I quickly had the opportunity to learn about the translational potential of research.”

Though she has no live industry collaborations right now, Professor Delibegovic has had funding from EFSD/Lilly diabetes research programme, and is in regular contact with colleagues in MedImmune and Astrazeneca and is open to future partnerships.

In 2003 she moved to Boston to start a postdoc in Professor Benjamin Neel’s lab at the Harvard Medical School.

“I spent 4 years at Harvard and it was a really productive time. My first task was to manage four different knock out mouse models at the same time. We did full phenotyping with no technical support whatsoever, just another post doc and I. It was manageable because, thanks to the training I had at PPU. I knew exactly what to do, how to structure my time and collaborate with my fellow postdocs so I could achieve what I needed to. That’s when I first started to look at the role of tyrosine phosphatases in diabetes,” she says.

The Friday beer hours, where scientists from all the labs got together were important: “You could relax and talk about your science in a much more chilled out way and come up with new collaborations. The nice thing about my time in Boston is that most of the people from my postdoc lab have gone on to form their own labs all around the world. So I’ve gained collaborators everywhere just by being there for four years,” says Professor Delibegovic.

Towards the end of her postdoc, Professor Delibegovic decided a move back to the UK would be the best way to enable her to start a family. The University of Aberdeen offered the opportunity for two strong positions so that she and her husband could continue their research careers together. Professor Delibegovic was awarded a Research Councils UK Fellowship in 2007 to investigate obesity and ageing in mouse models. She was promoted to Professor in 2015.

“All the odds are against you when you are starting out but I have always wanted to run my own lab and explore my own ideas. When I was finishing at Harvard, it felt it was a good time to try to make it. There weren’t many grants, I was competing against other scientists but it was actually incredibly exciting. Of course I reflected on whether or not I could make it, academic life is extremely competitive and you always think that everybody else is so much smarter than you, there’s that imposter syndrome we all have but I thought what’s the worst that can happen? So I tried my best.”

The diversity of Professor Delibegovic’s research portfolio demands clever time-management: “My days are very structured, I don’t waste any time. Everything is in my calendar and everything is achieved on time and that’s that.”

Most of her days have a booking for helping people in the lab. She spends a lot of time writing grants to keep the lab going but always makes time to help with the in vivo procedures her team do. “I like to train people myself in all the in vivo work we do, I have the most experience and it’s important to me to oversee this work.”

Professor Delibeogvic’s enthusiasm for research is reflected in the effort she puts into developing her team.

“Before I left my postdoc one of my best friends in Boston gave me a book called At The Helm. It’s written for principal investigators who are starting up their own labs. The message is that happy people do good experiments. It’s important to me that everyone in my team feels appreciated and has the space to work in the way that’s most productive for them.”

Actively mentoring her team is at the heart of Professor Delibegovic’s way of working.

She advises her PhD students to apply for fellowships as soon as they can. “Even if it’s an exchange for three or four months to go abroad, it sets you on the path for success.” she says. Winning her own first independent fellowship from Research Councils UK was a career high and critical to her decision to return to Scotland.

Professor Delibegovic is a mentoring coordinator at the University of Aberdeen, where academics are paired up with an impartial mentor from outside their research discipline. “The question that constantly comes up when I’m mentoring people is how do I know when to stop? Should I keep going with a project that’s not working? When I meet my mentees we often talk about development of transferrable skills. As a scientist you can actually get a job anywhere. It doesn’t matter what stage in your career you are at; you can always find yourself having to find another option and actually you should always work on lots of different skills at the same time.”

Professor Mirela Delibegovic: “Right now, I want to help other people to grow their own scientific careers. I really hope that I will be very proud of the people working in my lab. I haven’t had that many yet but so far I’ve been proud of them all. I think helping other people to succeed is an achievement, it’s important not to keep all the success for yourself.”

A giant cheque decorates the wall in Professor Delibegovic’s office. “I don’t ever want to take it down,” she says. “The Diabetes UK voluntary group in Elgin and Moray invited me to give a talk and they handed me over this cheque. One of their members did a marathon and raised over £2000 and then they raised even more money and donated it towards our project.”

Hand-drawn thank you cards from local school pupils frame the cheque. Professor Delibegovic finds inventive ways to share her research with new audiences, her enthusiasm for public engagement began as a PhD student, she says: “I first started outreach in Dundee. Professor Carol MacKintosh brought a group of kids into the lab on a Saturday morning. We took them on a forensic science adventure to figure out whose hair was clutched in the hands of PPU director Professor Sir Philip Cohen while he lay in the atrium pretending to be dead. We each had a code name and the kids had to use real research techniques in the lab to uncover the culprit. Can I just say, it wasn’t me!”

“To me being a scientist is not really a job, because I absolutely love it. In the lab meeting, every time somebody shows me a result that is exciting I am just so happy. Feeling like that is how I know I should still be doing this job. I also like the fact that my children are incredibly proud of me. One of the nicest things of being promoted to Professor was that my son was just over the moon.”

Professor Delibegovic has selected her studentship and first fellowships as career defining moments: “These are the awards that determined my current career, I wouldn’t be here if it were not for them.”

Professor Delibegovic describes the importance of each paper to her research.

“First paper to demonstrate that protein tyrosine phosphatase 1B (PTP1B) is the major regulator of body mass and adiposity through its action in the brain, and that neuronal PTP1B is essential for development of leptin resistance.”

“This paper describes the potential for a simple and achievable dietary intervention, by decreasing levels of methionine in the diet, to reverse the negative effects of ageing on body mass, adiposity and insulin resistance which could be easily implemented in humans; furthermore it reveals that FGF21 drives these positive effects, and considering that FGF21 analogues are already in use as anti-diabetic agents, provides further anti-ageing targets.”

“In this paper we reported the first evidence of a regulatory role for PTP1B in mediating a central dendritic cell function; it initiates an adaptive immune response in reaction to innate immune cell activation.”