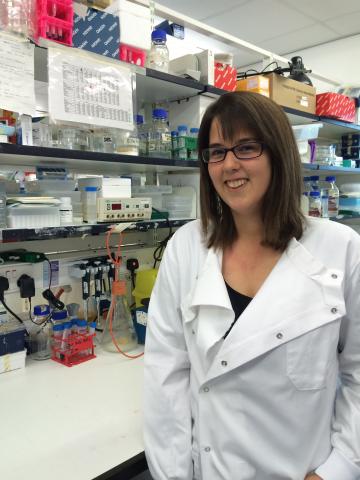 The chemistry of experimental design

Hannah’s PhD will give her experience of the pharmaceutical industry and an academic lab. Her CASE studentship in Professor Dario Alessi’s lab at MRC PPU is jointly funded by AstraZeneca and the Biotechnology and Biological Sciences Research Council (BBSRC). She’s looking forward to using the research tools on offer in AstraZeneca’s lab in her third year.

Hannah says: “I had a year-long lab placement as part of my biochemistry undergrad which is why I went straight from bachelors to PhD. It was the lab itself that brought me to Dundee. I applied for one specific project based on kinases. It just seemed really exciting to me because the studentship was to look in detail at the role kinases play in drug resistance in breast cancer and the approach looked interesting.”

About kinases: In biochemistry, a kinase is an enzyme that adds phosphates to other molecules. In human cells, adding phosphates to cell proteins is hugely important. It regulates much of a healthy cell’s activity by enabling signals to be sent and controlling cell pathways. There are lots of different kinases in the cell, each with a different role to play. Scientists study kinases to learn more about how a cell works when it’s healthy and what’s going wrong in disease.

The hVps34‐SGK3 pathway alleviates sustained PI3K/Akt inhibition by stimulating mTORC1 and tumour growth is published in The EMBO Journal.

2011: A levels in Biology, Chemistry, Maths and Psychology, Bournemouth and Poole College.

2015: Began PhD studies (Doctor of Philosophy) at the MRC PPU, University of Dundee.

I’m looking at a family of kinases called the SGK kinases at the moment the focus of my project is split in two. I’m interested in how a kinase called SGK3 is regulated, so how it is activated in response to various stimulants outside of the cells, and I want to know what happens when the kinase is degraded.

I’m collaborating with Professor Alessio Ciulli’s lab in Biological Chemistry and Drug Discovery on the first floor. They are the chemistry side of it, they are producing compounds which act as chemical degraders of my kinase so I’m then putting that into cells to degrade my kinase and look at the effects downstream. It’s working. So far there’ been a lot of optimisation, so a lot of screening different compounds and checking conditions and but we are seeing some really nice effects with the latest compounds.

It’s not finding a cure for cancer straight away, that’s not how basic medical research works. But it is looking at whether there is a separate pathway that could be targeted to overcome drug resistance in breast cancer. We know the pathway should have a role in resistance, by this I mean if people are treated for breast cancer, at first the therapy helps but then the tumour grows resistance to the drug. I’m trying to find out if targeting a second pathway could be useful in those treatments. Basically it’s validating the pathway to see whether it is a useful target in the future and then looking for a compound that would work on it.

Negative results can still be useful it just depends what the negative result is. If you had a question and the end result is no or if it’s that technically the experiment hasn’t worked it still tells you something.  Negative data on its own is still a useful thing. If you have an idea about how something works but it turns out not to be the case that’s still important.

My PhD is partially funded by AstraZeneca as I’m on a BBSRC CASE studentship. I definitely want to stay in research and in bench work but in terms of academia v industry that’s not something I’m sure about at the moment. I’ll spend a few months working in an industrial setting as part of my PhD so it’ll be good that I get that experience as well. It’s likely to be at some point in my third year when it slots in with my research. If I have a really nice compound from my work then I might take it to AstraZeneca to use all their high throughput techniques to examine it. My co-supervisor is Dr Darren Cross who is PPU alumni.

My cell lines are based on model cancer cells lines. They gain resistance to classic drug treatments called inhibitors that are used as therapy in breast cancer. You can actually see the cells change and upregulate the kinase SGK3 so it’s those models particularly that I’m looking at. If I could find a certain cell signature for resistance then I could use that to scan for more cell lines that could possibly be part of my project.

A lot of my day to day supervision is from Dario on the academic side but then I get input from the AstraZeneca team as well. They have a really interesting breast cancer cell line that hopefully if I get a nicely optimised compound I can try it out on.

As an undergrad I did a year-long lab project in my third year and it confirmed that I wanted to do more bench work and stay in research. It wasn’t an easy project, lots went wrong, there were lots of experiments that were coming back with negative data so it wasn’t that I had a really smooth ride through that project and thought a PhD would be great. I learnt the reality of lab work in that time and realised it was still something I wanted to do.

You learn which techniques you need to be able to answer your research questions as they develop. I’d done a couple of Western blots before I came to Dundee but not much. A lovely PhD student called Nazma in our lab looked after me for the first few weeks and taught me all the techniques that we use in the lab day by day. The first time she’d show me the technique and then the next time I’d do it with her supervising me.

Once you’ve learnt techniques lab work becomes a lot more focused on the question you want to answer. Then you can go away and design your own experiment. It’s a nice transition, you get more confidence in yourself when you get to that stage and start building your own experiments and knowing which tools to bring in.

Experimental design is what I really enjoy. I like the freedom to explore ideas and thinking ‘ok this is my question what am I going to be able to do to answer it?’. It’s probably why I like baking as well, that’s always my stress release, if it’s not going well in the lab I go home and bake. It’s probably the same techniques and the same enjoyment that I get from the lab. Whoever has a lab meeting on a Friday usually bakes so we’ve always got a good supply of cakes coming into the lab. Sometimes I walk in and say I had a bad day so here’s a cheesecake.

I like to get started early in the morning before everyone else. I started out doing normal working hours then just figured out what worked. For me it’s coming in between 7am and 8am to get gels running and tissue culture organised. I know I work better in the mornings.

There’s a big group of PhD students in MRC PPU at the moment who all started about the same time and we’re all quite close. Because we are all working in different labs we each have different levels and areas of expertise. This means you can always go to another PhD student and say ‘this is my problem or can you help me?’ and it’s good that you’ve got people you can approach so easily for help.

There’s a lot more that scientists could do to share our work with the public. I think often there is a gap between what we are doing and explaining that to the public. That said, when I try to explain my own research to people who aren’t scientists it can be a struggle. It’s quite a niche area, if you say drug resistance in breast cancer that’s something that people understand, so although what I’m doing isn’t finding drugs to treat breast cancer it’s easier to explain it that way and the build-up to the role of kinases if they are interested.

A PhD isn’t easy; things don’t always work straight away. A lot of the time when you are doing lab work at undergraduate level it’s designed to work for you and you get a happy ride. Lab work does take dedication. If you’d like to do a PhD do it in an area you are really passionate about, don’t just do it for the sake of doing a PhD, you need to have passion and drive in order to continue through it.

I like being in the lab at the bench. I think it does end up being a bit addictive in terms of getting results at the end of an experiment. It is hard work but when I get a good result at the end of it, the high I get from that is really exciting, it’s worth it.