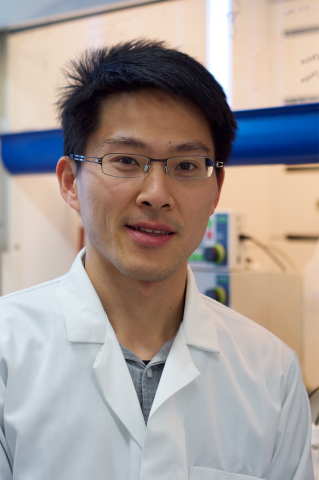 Kuan-Chuan is using his background in chemistry to make new discoveries in biology in his PhD in Dr. Satpal Virdee’s group at the Medical Research Council Protein Phosphorylation and Ubiquitylation Unit at the University of Dundee. He thinks like a chemist but uses the tools of a biologist to explore protein activity in the lab.

Kuan-Chuan says: “I work on the ubiquitin system. There are three families of enzymes, E1, E2 and E3, that work with ubiquitin in a cascade. When a protein substrate is tagged with ubiquitin it will be degraded, so it’s a bit like a protein turnover system. We are working on how to monitor the activity of the third enzyme, E3. We made a chemical probe that can detect E3 protein activity in different cell models, the aim is to figure out how E3 activity relates to neurodegeneration and other diseases.”

What is ubiquitin? A small but powerful protein found in every cell in the human body, ubiquitin’s job is to regulate the role of other proteins. When ubiquitin is linked to another protein it changes it and how it works. The most common role discovered so far is to tag another protein for destruction – the so called ‘molecular kiss of death’. Ubiquitylation is a growing field of research with huge potential to explain disease and reveal new drug targets.

Kuan-Chuan is named on a paper published in May 2016 that details how the lab made a chemical probe that can be used to profile the activity of E3s. They used samples from patients with Parkinson’s disease to show that the probe also works as a biomarker. Images on Dr Virdee’s website shows how it works.

Favourite research tool: The HPLC-MS machine – high performance liquid chromatography mass spectrometer – it measures the purity and molecular weight of sample components. Kuan-Chuan can see in real time if his protein modification is working – there will be a a new peak and a change in mass if there’s a reaction taking place. Follow @mrcppu on Twitter or Instagram to see pictures of Kuan-Chuan in action.

We know E3 proteins are regulated differently in disease and our lab has made a chemical probe that will help us learn how. There are around fifty different versions of a subclass of E3 that we know of so far and we want to to figure out if any play a role in various diseases? Is the protein upregulated or downregulated? We have already shown that the probe detects the activity status of parkin, a protein related to Parkinson’s disease. We’ve used skin cell samples from patients with Parkinson’s disease as a model to develop the probe. Last year I managed to get the probe working with cell lysate, the contents of a cell extracted as a fluid. It can tell whether a patient’s parkin protein is mutated or healthy.

Our aim is earlier diagnosis and better treatment options for Parkinson’s, but this is only a first step. In the future we want to set up a kit so that you prepare your probe on a plate, take a patient skin cell sample and use it to diagnose whether or not the patient’s parkin pathway is defective. This could also indicate what the best means of treatment might be.

The probe has a lot of potential applications. It binds to the catalytic site of the target protein which means drugs can’t, so we could use the probe for drug screening in a competitive way. I’m working on this right now, it’s my main project, I also have a side project which is a really big discovery recently.

We’ve just rewritten the text book a little bit with what we’ve found. We are writing up the manuscript for journal publication right now. Two weeks ago my boss presented our latest work to people in the unit and everyone came to say congratulations, this is super big! It’s nice and I’m excited about it but that’s not why I do science. When I was in senior high I wanted to be a medical doctor, I didn’t get enough grades to go to medical school but I still had an interest in biology. I just want to do something that is good for society and that can help people, that is my main goal. As a doctor you help a lot of people, but doing life sciences if you can contribute to making a new drug than you are helping people too and it’s doing something good, that’s why I chose life sciences.

I did my undergrad and masters in Taiwan. After my masters I did one year of military service and then I spent one year working in a chemistry lab, I used that time to apply for PhDs. I’m now three years into my PhD so next year I’ll write-up and go through my viva. I’ve already promised my supervisor I will stay one more year as a postdoc. I would like to optimise the E3 activity-based probe profiling platform so that other people in the lab can continue the work. I can see there being up to two more papers to write on our new discovery.

The way my undergraduate degree was taught in Taiwan was lecture, memorise, test. In life sciences we needed to remember so many details, like the glycolysis cycle and signalling pathways that once exams are finished most of us probably forget. When I was in my third year, there was a chance to go to a lab to do a research project and rather than stay in the life sciences department I went to the chemistry department. It turned out after four years of an undergraduate degree I knew nothing about lab biology, not how to do PCR or run a gel, but I did know chemistry and how to synthesise compounds very well so I went for a Master’s programme in medicinal chemistry.

I want to become the bridge between chemistry and biology. My girlfriend is a postdoc in a biology lab so we’ve always discussed signalling pathways, I always use the chemical way of thinking and she uses the biology approach. After a while we realised there is a huge gap scientifically in the way we each think. It made me wonder if this happened between scientists with different skills in pharmaceutical companies too. Often you find biologists don’t understand chemistry and chemists don’t understand biologists. If you talk to a chemist, they might not have any interest in biology. But, for me, if I’m going to make a compound I want to know how it is going to be used. On the other side a biologist might say, ‘you should make this compound, it’s just two circles it looks really easy, you can just add a and b together,’ but it’s not that easy. That’s why I chose Satpal’s lab, it’s fifty-fifty chemistry and biology.

All the tools of a biology lab I learnt from people working here. Three years ago when I started in PPU I knew nothing about how to do protein purifications or western blots or look after cells in tissue culture. I’m glad I’m here because by combining chemistry and biology you really can discover something new like we just have, it’s still biology, we just used a chemistry way to do it. Our chemical probe pulled a protein out of a cellular sample which we identified by using the mass spectrometer. A pure biologist might just ignore the difference but we thought no, there is definitely something happening there, so we dug back, and back, and back and we worked out what was going on.

I want to see my research become reality in my lifetime. That’s why I’d like to go into the pharmaceutical industry, that’s what it’s set up for. Why are you going to look at this protein? ‘Because it’s interesting’ is not the answer for me. I want to know how my research is going to be used, I don’t want to do it just because it is fun or interesting, I want to do research that will benefit people, that’s my motivation.

I’m quite lucky because I know what I want to do. I first started working in a chemistry lab when I was 20 years old, I’m 29 now, so have met a lot of PhD and Master’s students. If you are going to spend four or five years, at the most beautiful time of your life, on a PhD to become a postdoc, you need to know what you want to do, you can’t waste that time. People make fun of me and say I’m old like a postdoc but I know what I want to do in the future.

Military service created a lot of thinking time for me. I served in the military police unit where a typical mission would be guarding the airport in two hour rounds. It could be midnight and you were standing there guarding the airport, and no one talked to you. I thought about what I had done in the past and what I would like to do in the future and about how to do it. I’d worked really hard in my undergrad and masters so the space to think made it a bit like a gap year for me.

The hard-working environment here at PPU suits me really well. When I started though I had so much to learn, I came from a pure chemistry background, if I was working really late I told myself it was because I needed to catch up on the biology part.

I prepare everything the day before so that I can come in and get started straight away. The day is busy but I always make 15 minutes for a coffee. Sometimes I’m working at the bench, other times in tissue culture. We are a chemical biology lab so we do a bit of chemistry, a bit of biology, a bit of protein purification, every day the schedule is packed.

What I would like to do after twenty years is totally different to what I do now. Eventually I would like to go back to Taiwan. I want to help people and helping one, by one, by one is not realistic, you need to change rules or systems and the only way to do this is to be part of the government. To do that you need to earn experience and reputation. It’s what I really want to do. Everything I am doing now will prepare me for it. Scientific training is good to help with decision making, it teaches you to use evidence.

When I learnt English in Taiwan I was taught by a native speaker. It’s hard for the teacher to remember a whole class of Chinese names or even pronounce them correctly so for them it’s easier to just give everyone an English name. The teacher gave me Eric. Not a lot of people choose Eric in Taiwan, it’s always names like James or Michael, so I kept it, I like it.