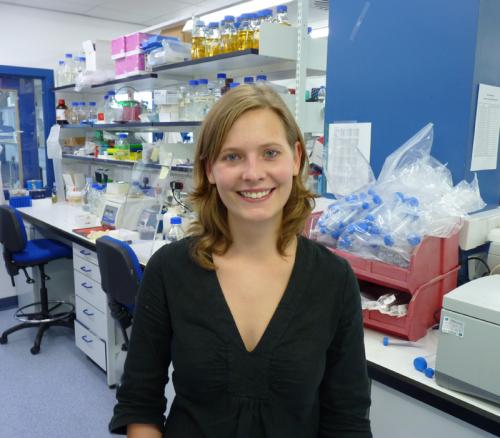 The TGFÃ_Â_ signalling pathway controls plethora of cellular functions during embryogenesis and in adult tissues. Consequently abnormal TGFÃ_Â_ signalling is associated with multiple human diseases such as fibrosis, immune disorders and cancer. TGFÃ_Â_ signalling is initiated upon ligand binding to a pair of receptor serine/threonine protein kinases on the cell surface. This triggers the phosphorylation of SMAD2/3 leading to the assembly and nuclear translocation of active SMAD2/3/4 transcriptional complex, which, together with other co-factors, drives the transcription of hundreds of target genes. The activity of SMAD transcription factors is tightly regulated. Reversible ubiquitylation of active SMAD complexes serves to fine-tune the cellular responses to TGFÃ_Â_ signals. While much is known about the E3 ubiquitin ligases that modulate the ubiquitylation of SMADs, the deubiquitylating enzymes that act on active SMAD complexes, which drive the TGFÃ_Â_ signalling, remain undefined.

Lina's work in the past two years has uncovered a unique role for the deubiquitylating enzyme OTUB1 in regulating the active SMAD complexes and thereby the TGFÃ_Â_ pathway.

The key novel findings that Lina's research has made are highlighted below:

Ã¢â‚¬Â¢ TGFÃ_Â_-induced phosphorylation of SMAD2/3 is necessary and sufficient for their interaction with OTUB1.

Ã¢â‚¬Â¢ OTUB1 promotes TGFÃ_Â_ signalling by binding to phospho-SMAD2/3 and preventing their ubiquitylation and degradation through the inhibition of E2 ubiquitin conjugating enzymes.

Lina's findings uncover for the first time a signal-induced phosphorylation-dependent recruitment of OTUB1 to its target in the TGFÃ_Â_ pathway. OTUB1 is the only DUB shown thus far to act on active SMAD2/3, while the deubiquitylase activity of OTUB1 appears not to be necessary. More recent studies have also reported such non-canonical mode of action for OTUB1 in the control of chromatin stability and DNA-damage responses. Lina's findings are not only significant within the TGFÃ_Â_ pathway, but may advance the field of deubiquitylation, especially when taking into account stimuli-induced phospho-dependent recruitment of a DUB to its target.

The paper entitled 'OTUB1 enhances TGFÃ_Â_ signalling by inhibiting the ubiquitylation and degradation of active SMAD2/3' can be accessed through Nature Communications, here
Fri 27th Sep 2013