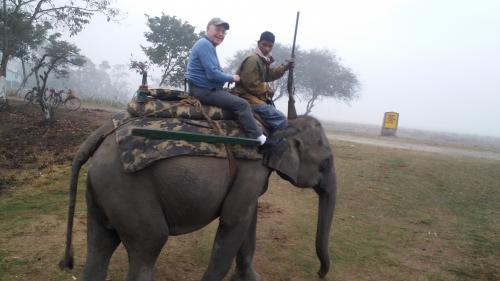 Professor Sir Philip Cohen is recently returned from a 10-day visit to India where, as a guest of the British Council, he gave 6 lectures to audiences in Kolkata, Guwahati, and Mumbai. During his free weekend, Philip took a 5-hour taxi ride from Guwahati - in the State of Assam, in North East India - passing many famous tea plantations (called tea gardens in Assam) to the Kaziranga National Park, where he went on safari by elephant at dawn. The elephant driver is carrying a rifle in case of attack by tigers, or charging rhino or water buffalo.

This was Philip's second ride on an elephant, the first having been at London Zoo, 61 years ago.