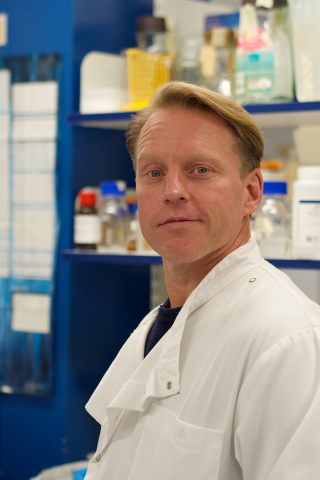 Originally from the west coast of Scotland, like most kids I was interested in science and this stayed with me throughout school and culminated in my gaining an honours degree in Molecular Biology from the University of Glasgow in 1997. My first position was with Lonza Biologics which was a challenging role working in the contract manufacture of human therapeutics, chiefly antibody production. I focussed on overhauling their proprietary antibody vectors and performed contract cloning for a wide variety of companies as well as heading the FISH program. I moved back to scotland in 2001 and worked as a molecular biologist with CXR Biosciences developing toxicological screens in cell-lines and mouse models, including the multi-mouse which reports on 5 different stress responses via unique biomarkers in the urine. I joined the unit in 2008 and have thoroughly enjoyed the shift in focus from money to research. I have improved my molecular skills further and am currently heading the CRISPR development within the unit which draws upon my background in transgenics.

When I'm not in the facility I can be found either doing DIY badly or fishing/camping in the wilds.